Citrus Heights, California brings a unique brand of Power Metal in the band Dire Peril. Sci-fi Power Metal to be exact. In their brand new EP Queen of the Galaxy, Dire Peril delivers four tracks that will cater to any listener. Happen to be a gamer? They have you covered with the first two tracks. “My Vengeance is Everything (Chaos Reigns)” and “Space Invaders”. The first track is the most aggressive on the EP and is inspired by the video game God of War. You can feel the anger of lead character Kratos in the lyrics and Norman Skinner’s soaring vocals that are reminiscent of a young Matt Barlow (Ex-Iced Earth, Ashes of Ares). “Space Invaders” is inspired by the 1980’s game of the same name. Rocking guitar riffs by Jason Ashcraft and Jearme Greathouse which really make you feel like you’re listening to VG music turned into metal. 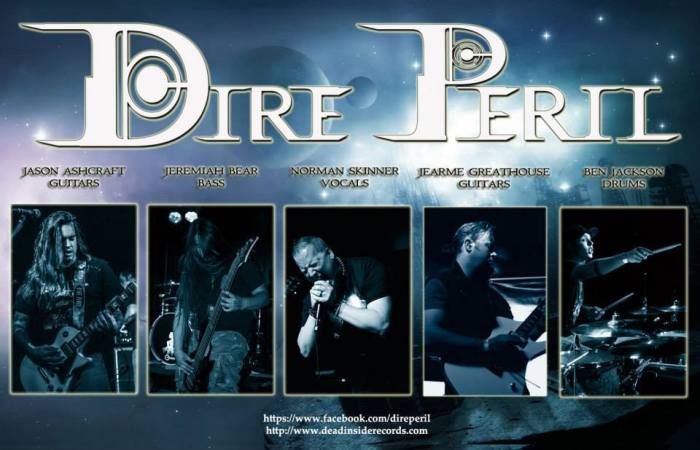 Following those two tracks is the song that I feel is the diamond of the album is the title track, Queen of the Galaxy. In this song, prominent vocal duties are given to Brittney Hayes (Lead Vocalist of Unleash the Archers) and the duality between her vocal tone and Norman Skinner’s epic singing voice make for a beautiful Power Metal tour de force. Rounding out the album is a cover of Boston’s “Something About You”. I love covers as much as the next guy, but I feel this is the weakest song on the EP. While not a horrible cover, it just doesn’t have the gravitas of the other songs and after following the powerful vocal and guitar track, Queen of the Galaxy, this cover just feels out of place. All in all, Dire Peril delivers a great 4 track EP and I absolutely look forward to seeing what they bring to their next EP.
-Robb Napalm/Capital Chaos TV