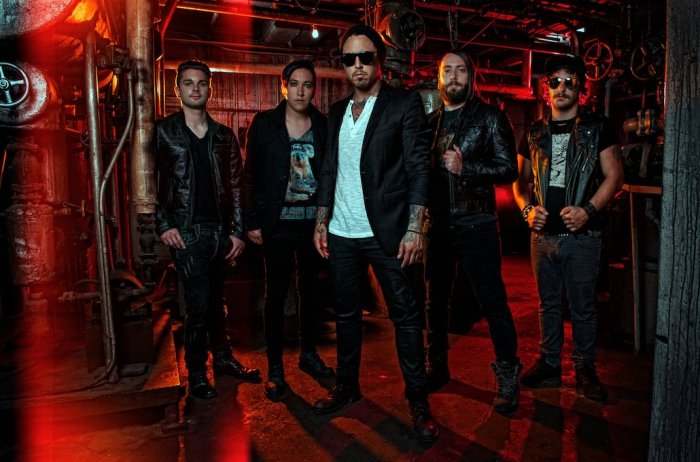 NEW YORK, NY – California rock mavens BURN HALO have debuted an all new single titled “Dying Without You” exclusively via Alternative Press Magazine today. “‘Dying Without You’ is a song about trying to cope and rebuild after a tragedy,” says front man James Hart. “We wanted the song to be musically fierce yet melodic, seamlessly blending metal and rock. I believe we accomplished that.”

The chorus-first “Dying Without You” is thrilling, venturing into dark, brooding lyrical territory, a persistent vibe maintained throughout the record.

BURN HALO will release WOLVES OF WAR on Friday September 4, 2015 via eOne Music. It will be the highly anticipated follow up to UP FROM THE ASHES released in 2011 and was produced, engineered and mixed by Fred Archambault (AVENGED SEVENFOLD).

WOLVES OF WAR, the first Burn Halo album through the California band’s new deal with eOne Music, burns with a fire akin to the brutal-but-melodic juxtaposition of New Wave Of American Heavy Metal standard-bearers Killswitch Engage, the neo-Guns N’ Roses attack of Avenged Sevenfold, and the dark ambience of HIM. Fans who adored Burn Halo singles like “Save Me” and “Tear it Down” will be fall in love with Burn Halo all over again, even as longtime Eighteen Visions acolytes will delight in their throwback power.

Like Loading...
‹ Capital Chaos TV To Interview @ Allstars Tour This Wednesday @ Ace Of Spades in Sacramento, California
Watain To Return To Sacramento With Mayhem & Rotting Christ ›