END_OF_DOCUMENT_TOKEN_TO_BE_REPLACED

Ohio’s WAR CURSE have released a video for their track Serpent which features a guest solo from Kragen Lum of EXODUS. The song is taken from their album Eradication which will be released in May via Svart Records. END_OF_DOCUMENT_TOKEN_TO_BE_REPLACED 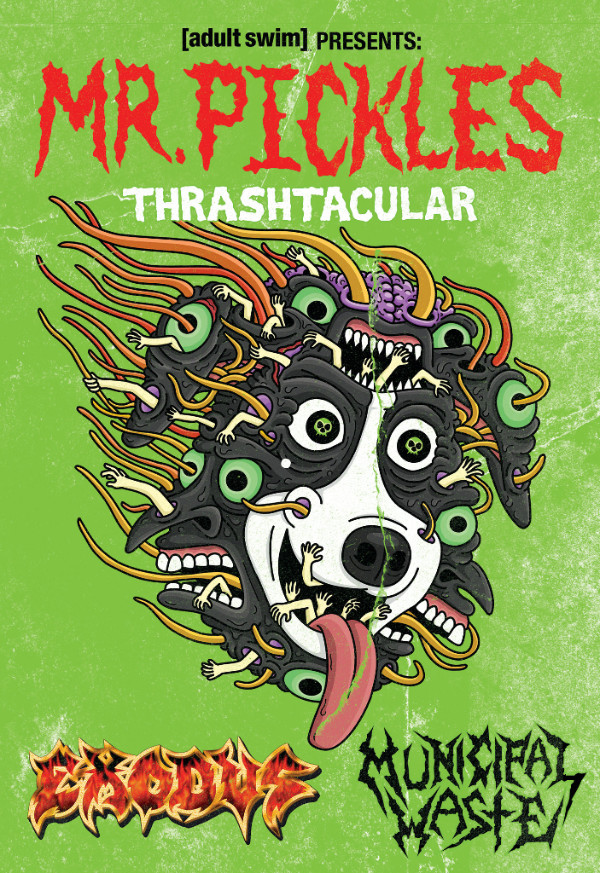 EXODUS Gary Holt states, “Super excited to hit the road again with our good bros in Municipal Wastefor the Adult Swim’s Mr. Pickles Thrash-tacular tour! This will be a thrash extravaganza at its finest!!!! Can’t wait!”
The original architects of the thrash metal scene, EXODUS has battled every kind of adversity over the past 30 years and used it all as fuel to stoke their ever-raging fire. With “Blood In Blood Out”, EXODUS’ tenth full-length studio album of new material prove they still have the fortitude, chops, and talent to deliver top-notch, ballad-free tunes that stand out without straying from the band’s core aesthetic.

Season three of Mr. Pickles follows the Goodman family, and the eccentric residents of Old Town, in their most off-the-wall escapades yet! Join Mr. Goodman and Mrs. Goodman in battling bullies, zombies and telemarketing plantation owners. Go on a ride along with Sheriff in the hit reality show “Sheriffs”, and learn from Tommy what it really takes to make a hit cartoon show. Don’t forget about the about the wonderful Mr. Pickles, who is never too far away from the action. This season he faces off against some of his toughest foes including memory hackers, ruthless television executives, and military footwear. Mr. Pickles is a HotHouse production created by Will Carsola and Dave Stewart. It is executive produced by Carsola, Stewart, Michael J. Rizzo, and Mike Mayfield.

Bay Area thrash metal kings Exodus have collided with the Florida death metal godfathers from Obituary for another epic “Battle of the Bays” this fall. The two American legends went to war in Europe last year and are currently bringing the Battle to America this time with support from Power Trip and Dust Bolt.

The co-headlining tour kicked off September 14th in Durham, NC and ends on October 15th in Baton Rouge, LA. Tickets are still on sale and a listing of remaining dates is available below.

Exodus perform their classics Deranged, Fabulous Disaster, A Lesson in Violence, Blacklist, War Is My Shepherd & Bonded by Blood @ Ace Of Spades in Sacramento, California 10/03/17 with openers Obituary & Dust Bolt in the video steaming below.

German power four-piece DUST BOLT released their third album Mass Confusion in July 2016 via Napalm Records.  (Order Here)
After some flight delays and visa issues, DUST BOLT will finally travel to North America for the first time ever and join Obituary and Exodus on the “The Battle of the Bays” Tour.  DUST BOLT will join the tour tomorrow September 27th in Columbus, OH and will take part in the remainder of the tour, which runs through October 15th in Baton Rouge, LA.
The guys cannot wait to start the tour:
“Guess who´s back? Presumed dead almost smashed but we have been resurrected and back on track. We are stoked to finally join the “The Battle of the Bays” Tour and get our asses over to the United States to support one of the craziest and best lineups we have seen in a while! Obituary, Exodus, Power Trip and DUST BOLT will kick ass all together on the second half of the tour, starting in Columbus Ohio on September 27th. We had some really bad luck with cancelled flights and multiple visa issues – BUT all of that does not matter anymore, because we have never been so ready to get out on tour and play some fucking music! United States, Battle of the Bays – here we come! Expect more than 300 percent each night. This tour is a dream come true for us. We have nothing to lose, but tons of energy to give. Check out the tour dates, catch us live, bring a friend and prepare to get smashed.”
It’s only been six years since Southern Germans DUST BOLT won the W:O:A Metal Battle 2011 – six years the band has used to transform themselves from hot newcomers into national thrash heroes with their debut Violent Demolition! These Bay Area aficionados dropped their third full length Mass Confusion in July 2016. Relentless touring plus constant fine-tuning of the typical DUST BOLT sound have finally paid off: the old school songwriting is focused and free of ballast weight, yet despite all the rage and aggression there is still plenty of breathing space for melodic guitar work, gang shouts and ten ton grooves.
Dust Bolt W/Obituary, Exodus and Powertrip
9/27: Columbus, OH @ Park Street Saloon
9/28: Indianapolis, IN @ Deluxe @ Old National Center
9/29: Joliet, IL @ The Forge
9/30: Minneapolis, MN @ Skyway Theatre
10/1: St. Louis, MO @ The Ready Room
10/3: Lawrence, KS @ Granada Theater
10/4: Ft. Collins, CO @ Aggie Theater
10/6: Sacramento, CA @ Ace of Spades*
10/7: Los Angeles, CA @ Teragram Ballroom*
10/8: San Diego, CA @ The Observatory North Park
10/10: Tucson, AZ @ The Rock
10/11: Albuquerque, NM @ Sunshine Theater
10/12: El Paso, TX @ Tricky Falls
10/14: San Antonio, TX @ Paper Tiger*
10/15: Baton Rouge, LA @ The Varsity Theater +
10/16: Gainesville, FL @ High Dive +

The band comments on the video and song: “We are super excited to bring you guys another music video from the new album. This video was extra fun for the band as we invited James to ride along with us for a couple shows and get onstage/offstage and crowd footage then his entire crew met up with us and filmed a show with multi-camera angles. ‘Sentence Day’ is one of our favorite songs on the album and definitely a fan favorite so we are proud to bring you guys this video. Enjoy!”

This weekend, Exodus will headline it’s first Bay Area club shows since late 2013 when the band takes over the Chapel in San Francisco’s Mission District for two nights. The band is promising a special event for fans with plans to film the Exodus as they perform some rarely heard songs alongside classic hits in addition to inviting some past members onstage for guest appearances. CBS SF spoke to Holt earlier this week about the two-night SF residency as well as his plans with both Exodus and Slayer.

CBS SF: When we talked a few years ago prior to Blood In Blood Outbeing recorded, you mentioned having gotten the “Pink Floyd or Rush of thrash” out of your system as far as Exhibit A and Exhibit B leaning towards more complex song structures. Do you see the new album sticking to the more straight forward type of tunes that were on Blood In Blood Out?

Gary Holt: You know, it’s hard to say. Of the stuff I’ve written so far, I think the songs are shorter, but I think they’re also at the same time more progressive than the last album. It’s a little outside the box. It’s really super crushing, but I think people will be surprised.

It’s an Exodus album, but as of now, the stuff Tom and I have been putting together is a bit different. It’s got those subtle changes that make for a departure, but it will still stay true to the core of the band’s sound.

CBS SF: Had Exodus played or toured with Maiden before?

Gary Holt: No, Maiden has been out on tour with Ghost, but I think they did this a couple of years ago as well. When they played the Southern California show they added some bands and made it kind of like a mini festival because that amphitheater down there is massive. I guess you’d call it a little one-day Maiden fest. It was a pretty epic show. It just had some epic technical failures.

Tampa Bay Florida Death Metal Godfathers OBITUARY collide with Bay Area Thrash Metal Kings EXODUS for another epic Battle of the Bays this Fall! The two American legends went to war in Europe last year and are now bringing the Battle to America this time with support from POWER TRIP and DUST BOLT. The co-headlining tour kicks off September 14 in Durham, NC and ends on October 15 in Baton Rouge, LA. Tickets go on sale this Friday, June 16 and a complete listing of dates is available below. 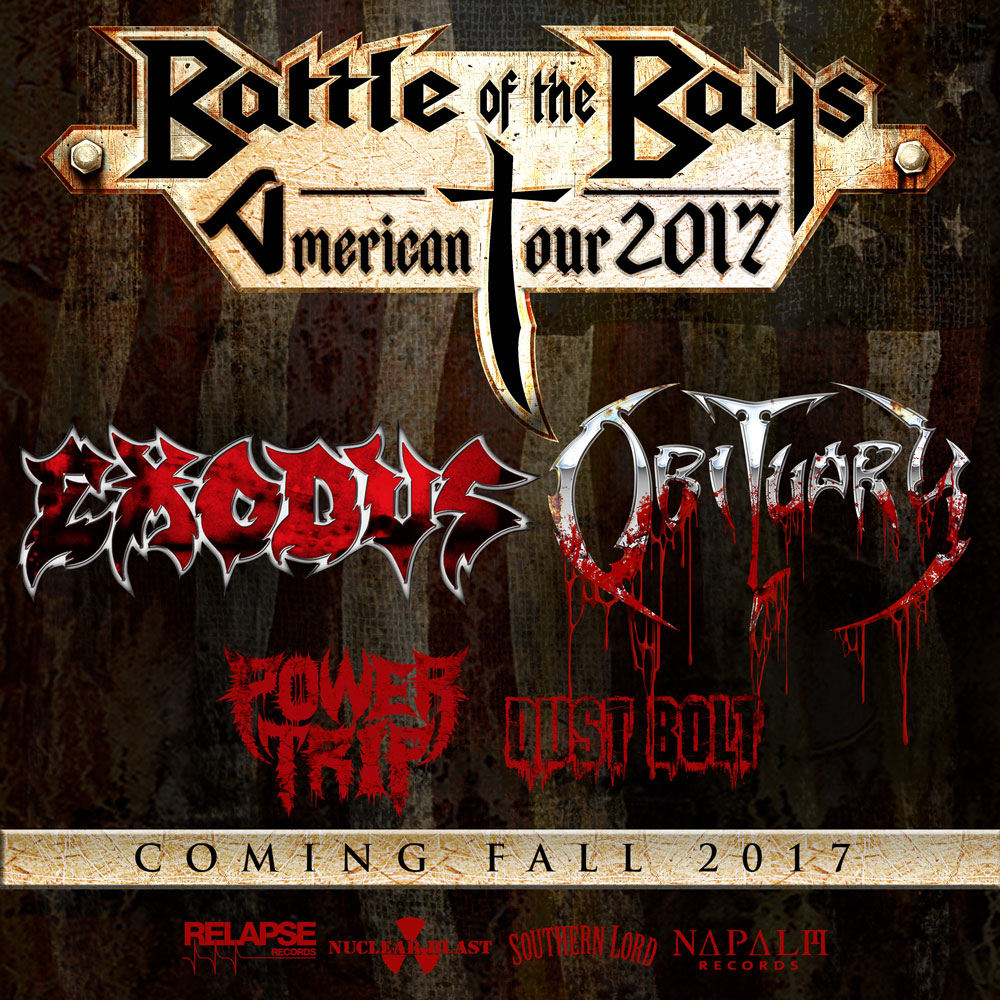 Additionally, OBITUARY will perform at the prestigious Hellfest Open Air 2017 on June 18 in France and return to Europe for a headline tour on July 8 including multiple festival appearances at Resurrection Festival, Rock Maraton 2017, VOA Heavy Rock Fest and more. All confirmed OBITUARY tour dates are listed below.

OBITUARY’s latest, self-titled album is out now on CD/LP/Digital via Relapse Records.

* No Exodus
+ Obituary, Dust Bolt ONLY

“Fueled by Rage” hits the streets worldwide on that same day via VIOLENT CREEK Records (Germany) in cd, vinyl and digital formats.

The specially bundled album combines all 3 of their previously released eps (Angerhead, Headful of Hate and Fueled by Rage) into one killer package for a ferocious metallic onslaught of west coast metal, thrash, punk and hardcore music.

In a short amount of time, Angerhead have created a major buzz within the Bay Area Thrash scene that they grew playing in. In the first few years, they have garnered lots of attention by sharing the stages with Suicidal Tendencies, Soulfly, Exodus, Testament, Death Angel, Forbidden, DRI, Quiet Riot, Static X, Kittie and many more hard hitting musical acts. Local metal promoters love having Angerhead on bigger bills, as they feel the band can bring all types of fans of heavy music together.

In 2013, Angerhead went in the studio and recorded a 3 song EP, which featured the title track “Angerhead” with Paul sharing vocal duties with Steve “Zetro” Souza (Exodus, Hatriot).