Swedish extreme tech-metal pioneers MESHUGGAH have announced their 2018 North American tourwith special guests CODE ORANGE and TOOTHGRINDER. The tour will kick off at the Commodore Ballroom in Vancouver, BC on January 23rd and make stops in Seattle, Portland, and San Francisco before concluding at The Wiltern in Los Angeles on January 29th! Following the 6 show trek,MESHUGGAH will perform at the 70,000 Tons Of Metal Cruise.

MESHUGGAH is touring in support of their highly acclaimed eighth studio album, The Violent Sleep of Reason which secured the band their first GRAMMY nomination for “Best Metal Performance.”  The album also debuted at #17 on the U.S. Billboard Top 200 chart as well as landed at #9 on theCanadian Top Current Albums chart. 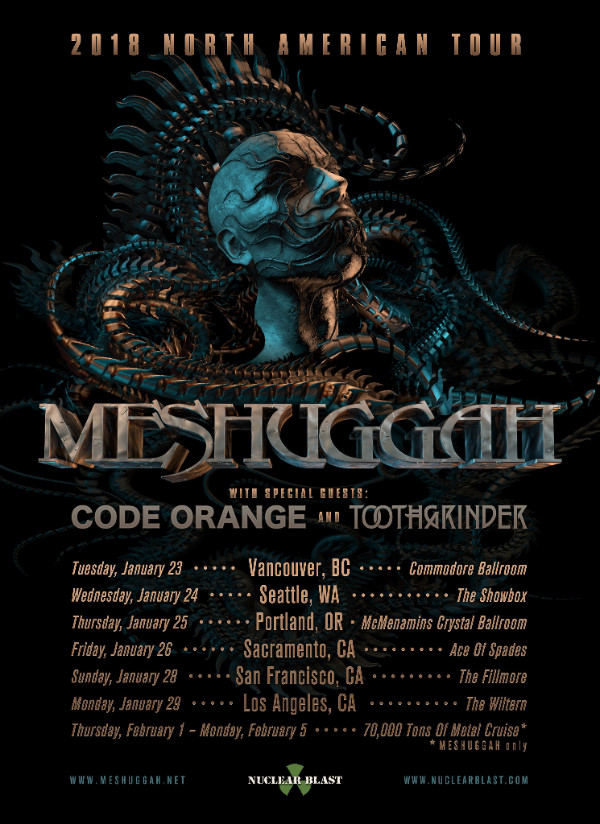 Tickets for the tour go on sale on Friday, December 8th at 1 PM EST at www.meshuggah.net/tour.

Hailing from Grand Forks, B.C, named after, as vocalist Shane Sherman explains, “a slang term local to our area for a piece of machinery that was used in the mines over a hundred years ago.” Isolation has most certainly bred inspiration in the shape of Slagduster. “We are the only four musicians in our small town driven to form a progressive metal band.”

Inspired by such giants as Goijira. Sikth, Meshuggah, Dillinger Escape Plan, Between The Buried And Me, Shane describes Slagduster’s sound as “progressive, groovy, creative, unique, heavy.”

Shane feels their new album ‘Deadweight’ will be well received by fans. “Naturally our sound has come a long way since our debut release in 2010. The music is more complex, and much more developed, still heavy, but even more groove based. Listeners can expect to be challenged by focusing on the compositions, or lost in the musical landscape.”

‘Deadweight’ is due out on May 5, 2017 and will be available through all major online retailers.

Swedish extreme tech-metal pioneers MESHUGGAH released their eighth studio album, The Violent Sleep Of Reason. In celebration of the new album, the band released a video for “Clockworks”.

Tomas Haake comments about the album, “”Basically, the whole idea of why we chose the title is it kinda connects with the lyrical content of the album. Which is to a fair degree about current events and what you see is going on as far as terrorism today, extremist views on ideals, and religious dogma and the violent implications that you get from being asleep so to speak and not acting/reacting to what is going on in the proper way”

Don’t miss your chance to catch MESHUGGAH on their epic North American Fall 2016 tour. The trek will kick-off at the House Of Blues in Lake Buena Vista, Florida on October 10th, visit 2 Canadian cities as well as Knotfest Mexico before concluding in Maryland at The Fillmore on November 6th. Joining the band as special guests is none other than US metallers HIGH ON FIRE!

The Swedish extreme tech-metal pioneers MESHUGGAH will release their upcoming eighth album, The Violent Sleep Of Reason on October 7th via Nuclear Blast. Today, the band premieres their first single “Born In Dissonance” and an exclusive interview with Tomas Haake at Rolling Stone.

Order your copy of the album on either iTunes or Amazon  and receive “Born In Dissonance” as an instant great tomorrow, August 27th.

Earlier this week, the band released the first trailer discussing the title and cover artwork. If you missed it, you can watch it on the Nuclear Blast YouTube channel!

Tomas Haake comments about the album, “”Basically, the whole idea of why we chose the title is it kinda connects with the lyrical content of the album. Which is to a fair degree about current events and what you see is going on as far as terrorism today, extremist views on ideals, and religious dogma and the violent implications that you get from being asleep so to speak and not acting/reacting to what is going on in the proper way”

The album was produced by the band and was engineered by Tue Madsen of Puk Studios in Kaerby, Denmark. For the cover, the band once again enlisted Keerych Luminokaya who created the artwork for Kolossand The Ophidian Trek as well as the new images for each of the 7 albums and 3 EP’s featured in the 25 Years of Musical Deviance box set.

The Violent Sleep Of Reason will be available in the following formats:

*See below for photos*

Pre-order The Violent Sleep Of Reason in the format of our choice here
Or digitally here:

On the 10th, guests attending the Fear FestEvil VIP Party will enjoy a classic night of ‘whodunnit’ mystery madness, dining alongside Kirk Hammett, touring the infamously eerie and atmospheric mansion, and trying to figure out who killed who! Guests can expect twists, turns and clues from some very special ‘horror royalty’ as they try to crack the mystery open.

On Saturday April 11th and Sunday April 12th, Fear FestEvil friends heading to the RockBar Theater can expect to see some of the finest pieces in any modern horror collection as Kirk Von Hammett unveils more of The Crypt publicly, before throwing down some heavy music courtesy of Meshuggah, High On Fire, Orchid, Blues Pills, Agnostic Front, and Asada Messiah. SiriusXM Radio’s Liquid Metal host Jose Mangin will preside over proceedings.

“It has always been my intention that Fear FestEvil events carry both the weird and the loud,” says Kirk Hammett, “and what better way to achieve another extension of what we want to do than eat dinner in a haunted house while solving criminal acts before a weekend of super kick-­ass music?!”