I arrived at Slim’s around 7:20pm, expecting a huge line by the door. There was no one there except for the security crew. Once inside, I saw about 50 people waiting for the show to start. END_OF_DOCUMENT_TOKEN_TO_BE_REPLACED

Legendary New Jersey thrashers OVERKILL are proud to announce The Wings Over USA 2020 tour. Kicking off on February 26th at the House of Blues of Anaheim, the 17-date tour which will feature special guests EXHORDER and HYDRAFORM will make stops in Las Vegas, New Orleans and Atlanta before concluding in New Jersey. The final date will welcome M.O.D. featuring Billy Milano and DEMOLITION HAMMER. END_OF_DOCUMENT_TOKEN_TO_BE_REPLACED

Legendary New Jersey thrashers OVERKILL are proud to announce The Wings Over USA 2019 tour. Kicking off on April 25th in Baltimore, the tour will make stops in Pittsburgh, Chicago and Nashville before concluding in Boston on May 11th. Joining the tour are none other than San Francisco Bay Area thrash legends and label mates DEATH ANGEL and ex-members of Megadeth, Shadows Fall and Scar The Martyr, ACT OF DEFIANCE.
END_OF_DOCUMENT_TOKEN_TO_BE_REPLACED

Legendary New Jersey thrashers OVERKILL will unleash their 19th studio record, The Wings Of War, on February 22, 2019 via Nuclear Blast.

Today, the band launches their multi-part documentary series entitled “Welcome To The Garden States”. Watch as the band details the bands beginning and how each member was introduced to the band. Check it out below.

Bobby “Blitz” Ellsworth comments, “The time has come, for a first taste, ‘Last Man Standing’. This cut got the unanimous nod to open The Wings of War, all they way back to the first demos in March, so much so, it was mock titled OPENER up until the recording. Sometimes everyone is on the same page, wtf!. So dig into some old school thrash, with a side order of Jersey made, head-banging.”

Like Loading...
Legendary New Jersey thrashers OVERKILL will unleash their 19th studio record, The Wings Of War, on February 22, 2019 via Nuclear Blast. Today, the band released their first single “Last Man Standing”. Check out the lyric video below.

Bobby “Blitz” Ellsworth comments, “The time has come, for a first taste, ‘Last Man Standing‘.  This cut got the unanimous nod to open The Wings of War, all they way back to the first demos in March, so much so, it was mock titled OPENER up until the recording.  Sometimes everyone is on the same page, wtf!.  So dig into some old school thrash, with a side order of Jersey made, head-banging.”

The Wings Of War

will be available for purchase in the following formats:

The Wings Of War was recorded at Gear Recording Studio in New Jersey, SKH Studio in Florida and Jrod Productions with engineering handled by DD and Dave. The album was produced by the band while Chris “Zeuss” Harris.handled the mixing and mastering. Travis Smith (NEVERMORE, OPETH, SOILWORK, DEATH…) was once again enlisted to create the artwork for the album.

Legendary New Jersey thrashers, OVERKILL have announced they will release their Live In Overhausen album on May 18, 2018 via Nuclear Blast. Today, the band have released the second trailer for this upcoming release. Check it out below. 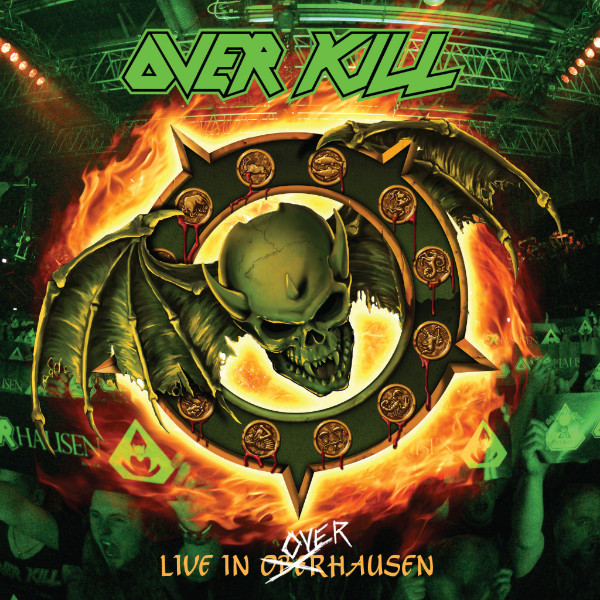 Celebrating the band’s history, Live In Overhausen, captured not one but two album anniversaries. Fans assembled on April 16, 2016 at Turbinenhalle 2 in Oberhausen, Germany for the 25th Anniversary of Horrorscope and 30th Anniversary of where it all began, Feel The Fire. A full night of kill from the past played loud and in its entirety!

What can be said about a band like Overkill that hasn’t already been said? They are among the pioneers of Thrash Metal, always consistent with their musical style, and show no signs of slowing down. The band’s latest album is entitled The Grinding Wheel and displays once again, these old school Thrashers still got it, and got it good.

With the bulk of the writing being done by bass extraordinaire D.D. Verni and lead singer Bobby “Blitz” Ellsworth, it’s a little amazing this writing duo never run out of solid Thrash riffs. I mean really think about it, The Grinding Wheel is Overkill’s 18th studio release and their sound is still lively and as fresh ever.
As much as I enjoyed Overkill’s 2014 release White Devil Armory, I’m pretty sure The Grinding Wheel tops it. The combination of the rhythms, Bobby’s voice and production make this album sound old school and new all at once. As Thrashy as this album is, it’s also super clean sounding and here are a few prime examples that stood out to me.
Right off the bat starting with track one “Mean Green Killing Machine” we get a killer intro of drums followed by that traditional Overkill guitar tone and D.D.’s bass rumbling. The intro builds up slowly and then the payoff, a true Thrashers dream, a rhythm that should instantly turn any floor into a sweet circle pit. What I truly enjoyed about this tune is towards the middle of the song, there is a little slow down and we hear a lower toned Bobby sing in a range not normally associated with him. That slow down is followed by another build up and paying that off with some on point guitar solos towards the back half of the song. “Mean Green Killing Machine” is solid track and battling for my favorite on this album.
The very next track is called “Goddamn Trouble” and it is just downright fun. This particular tune struck me having a Southern tone or influence. Sort of odd that’s what I heard knowing darn well these Thrash veterans are straight New Jersey boys. Anyhow, the riffs and rhythm section hold the fort down with a steady energetic groove that every Headbanger wants from his Thrash music.
Moving on to track seven “Come Heavy” is possibly the most “commercial” sounding song on this record. It’s not super Thrashy, but it is heavy as hell. D.D.’s bass lines are really amazing on this track. If you are a fan of bass players like yours truly, you will appreciate this track. There is really steady drumming done on this track as well as some really neat guitar solos. Not the truest Thrash tune on this record but it’s one of my favorites.
What I enjoyed about Overkill’s record The Grinding Wheel most was there were moments where I could have sworn I was back in 1987, when Thrash was king. The Grinding Wheel has everything you want in an Overkill album, or any album. Great riffs, Bobby’s vocals are on point and really good writing. The new material should be most excellent live when their tour starts this month. You should buy this album and a ticket to the show, you won’t regret it.

The masters of melancholic progressive metal, AMORPHIS, will return to North America next March/April for a long overdue headlining tour. Support will come from fellow Fin’s and melodic doom/death merchants SWALLOW THE SUN. The band will also appear on select dates with thrash legends OVERKILL and Egyptian themed technical death metal champions NILE.

“It’s been a long time since we toured in North America and Canada,” comments guitarist Esa Holopainen. “To be honest, way too long and at some point we thought we might never be back. In show business, things are not that simple and no matter how much AMORPHIS would like to tour, or play shows in different territories, usually it just doesn’t make sense.

‘Now it makes sense and we really wanted to make this to happen, after receiving so much positive feedback from US fans. As it has been quite a while since the US and Canadian fans have seen us, we will cover a lot of material from the latest AMORPHIS albums as well as play classics from Tales From The Thousand Lakes and Elegy,which were groundbreaking albums to us and many fans.

“It’s a great pleasure to have our country fellows SWALLOW THE SUN to join the tour as well. A great band. So there’s plenty of Finnish melancholy on stage and not that many major chords are going to be played. Still we arrive with happy hearts and will rock across US like never before. Shine on brothers and sisters!”