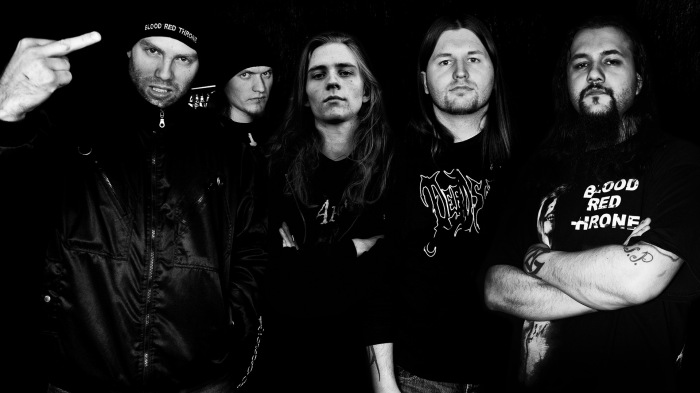 The kings of Norwegian death metal, BLOOD RED THRONE have been unleashing hell on earth since 1998. The band was formed by Daniel “DØD” Olaisen (formerly of Satyricon).
During the last 18 years the band has recorded seven albums with great critiques, toured internationally in headliner and co-headliner spots, and also ripped apart most of the greatest metal festivals on the planet. The band saw a major member-change in 2011 and a new extreme energy to their name.
Hungry as hell, founder “DØD” gathered Ole Bent Madsen (bass), Ivan ‘Meathook’ Gujic (guitar), Freddy Bolsø (original drummer) and Yngve “BOLT” Christiansen (vocals) to bring forward this Norwegian death-metal institution.
Together, they have brought BLOOD RED THRONE to a new level of crazy precision in this, their 18th year, and interest for the band has never been greater.
Live, Blood Red Throne delivers total mayhem of unstable brutality, mixed with deadly precision of speed, aggression and groove, which blows any crowd away.
On July 15, BLOOD RED THRONE will release Union Of Flesh And Machine, their eighth studio album, and follow up to the success of BLOOD RED THRONE of 2013, on a newly signed record deal with SPINEFARM/CANDLELIGHT Records.