Home › Interviews › GRIT drummer Scott Longballa interrogated. “I started on guitar but sold it to buy a surfboard.”

GRIT drummer Scott Longballa interrogated. “I started on guitar but sold it to buy a surfboard.”

Grit is a hard rock/heavy metal band from Corvallis, Oregon. Formed in 2015, with lead singer Damion Brewer, the band went under some serious line-up changes with the addition of Mike Ewing on guitar and Scott Longballa on drums.

After some searching, Leland Holden, on bass was brought in to complete the current line-up. Grit hit the ground running with their three song demo in 2016 and added three songs in the following seven months to complete their EP Warsworn with Juan Urteaga from Trident Studios, Pacheco, California (Testament, Machine Head, Viscous Rumors).

We moved around a lot when I was younger and music has always been my comfort zone. My older brother got me into Rock at a very early age.

How did you become a drummer? Are you proficient in any other instruments ?

I started on guitar but sold it to buy a surfboard. I picked up drums later on but it was a natural fit for me. Like I should have been playing all along.

I actually have grown up all over California and went to high school in the Bay Area so the Thrash Metal scene is what I was into. Favorite bands for me at that time and still would be Slayer, Megadeth, Faith No More, Testament, Death Angel, Exodus, Metallica and many others. 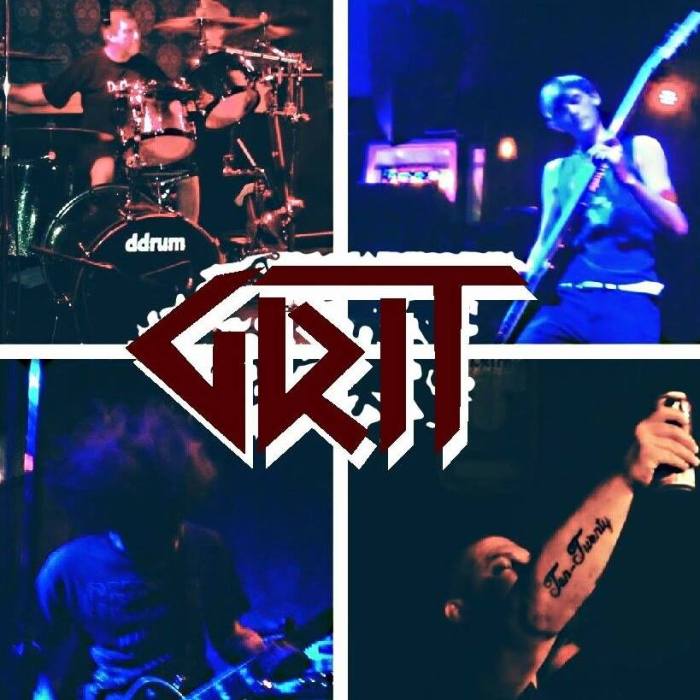 Has there been times when drugs and alcohol were beneficial to the band?

No, never. In fact the opposite.

Metal with some old school Thrash mixed in here and there. Heavy and groove based riffs.

Is doing ticket pre-sales the same thing as pay to play?

Never had to pay to play but we do pre sale tickets. But yeah, probably.

Iron Maiden Killers. Maiden for sure.

DIY forever or signing with a label at first opportunity?

We’re open to talking with a label but have been DIY so far.

Whats the biggest show you have played so far and do you still get nervous before a gig?

Maybe, with Battle Beast at the Hawthorne. I’m always a little nervous but it keeps me focused.

Favorite songs on the new album and why?

Warsworn as it’s our anthem song. 13 Knots as it takes a few different directions. Pity because it’s a great groove based song.

Are there any political or social issues hidden in Grit songs ?

Warsworn is about supporting the troops that fight for us.

We got together as a band and all voted on the order we liked.

We endorse our selves right now, haha. DW would be nice.

Get up Offa That Thing by James Brown. Iron Maiden, Killers. AC/DC, Highway to Hell. Metallica, Ride the Lightning.

Metal fans are the best! Listen to GRIT! GRITMETAL.com