This November/December, The Black Dahlia Murder will continue it’s support of their internationally acclaimed Nightbringers album with a new round of tour dates. The run will included a stop at the inaugural Los Angeles version of Decibel Magazine’s Metal and Beer fest. Support along the way comes from friends in Power Trip, Pig Destroyer, Ghoul, Midnight, Khemmis, Gost, Skeletal Remains, Devourment, and Havok. 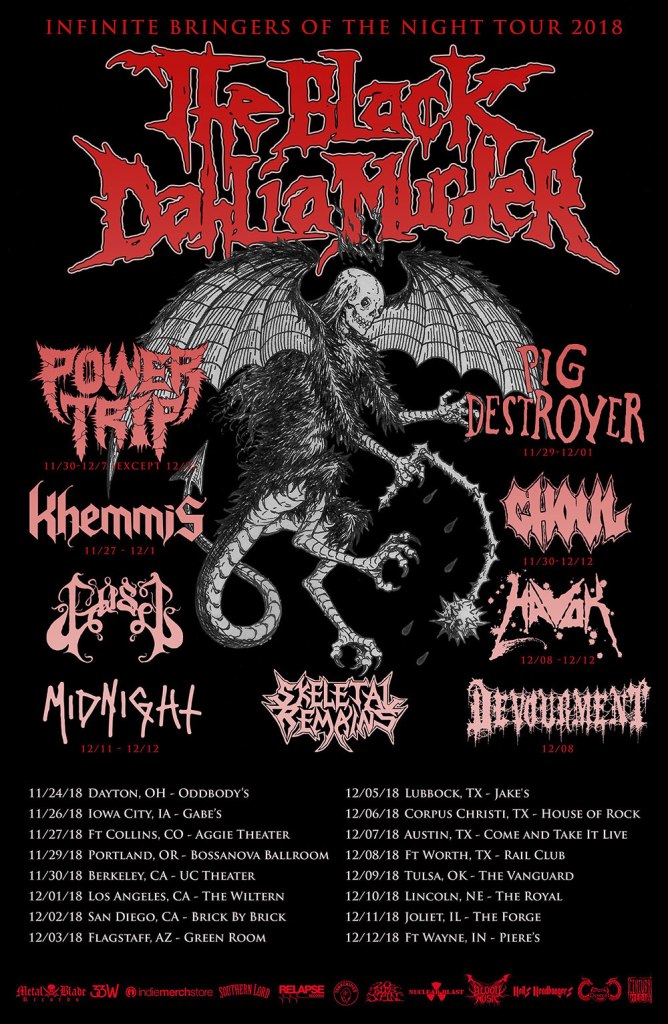 The Black Dahlia Murder front-man Trevor Strnad comments: “YES! The time has finally come and we are able to announce one of the coolest tours we have ever been a part of! As you can imagine, I had quite a hand in assembling the line-up here, and I am so proud and thrilled at what we’ve been able to construct. Not only do we in The Black Dahlia Murder get to go rage at Decibel Metal and Beer Fest in LA this winter, but we have surrounded ourselves with some INSANE regional line-ups featuring many of my favorite bands in the underground right now, to see us to California and back. Thanks to all parties involved, and be sure to check the fine print to see which of these amazingly sick outfits will be joining us in your town this November and December.”

See below for all dates!

The Black Dahlia Murder will be touring in support of their latest album, Nightbringers, which was released to critical acclaim last fall. In the hands of guitarist Brian Eschbach – who co-founded the band with front-man Trevor Strnad in 2001 – and new recruit Brandon Ellis (Arsis, ex-Cannabis Corpse), Nightbringers is rich with dynamic riffs that are at once fresh and classic The Black Dahlia Murder, resulting in a collection that shifts through many moods and effortlessly incorporates various elements of extreme metal.