Anna Dubois of Spitting Roses – “Run-DMC was my first record, I love records”. 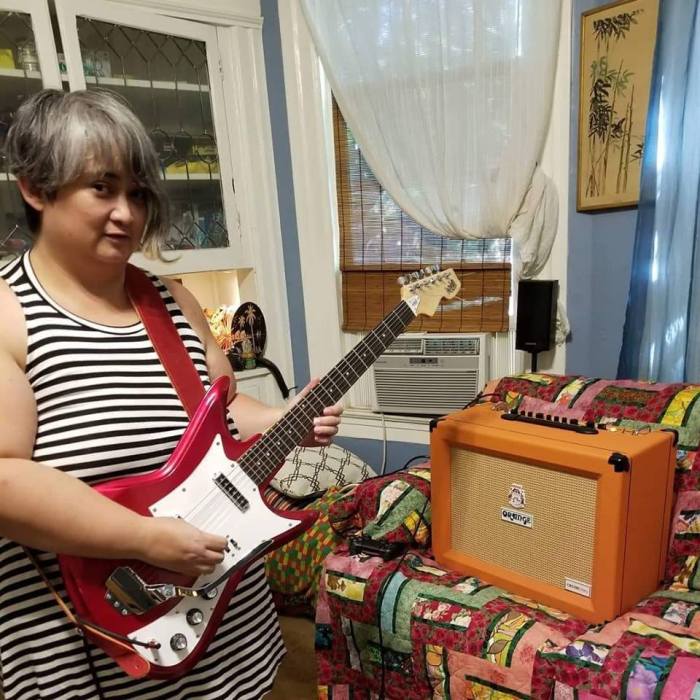 How did you first get in to music? Who or what turned you onto punk rock?

My mom told me I use to dance in her belly when any music was played. So from the very beginning. The turning point was The Replacements. Heard them on my radio, and recorded them on live 105 (a San Francisco radio station). When I moved to Sacramento at 15, I met my friend Marianne, she introduced me to so much. We were going to Cattle Club every chance we got. And seeing Fugazi for 5 bucks at the Crest was amazing.

When I was 7, I wanted a drum set, because I saw a woman playing drums on MTV. This woman was Sheila E. My request was ignored, but at 9 my dad gave me an acoustic guitar. At first I didn’t know what to do with it. So I rode my bike to a book store and bought a book on how to play guitar. I jammed with people in high school, one group we had was called Commander Taco. We had a song called Whales Fucking. nothing came of that band, but it was fun.

Have you always been creative?

Yes, it is the only way to be and not go crazy in this world. Being creative has saved me so many times.

How did Spitting Roses come about?

My friend Julie Bruce was texting me about how we should reform the Phlegmings, then stuff happened, and she couldn’t partake. Mickie and I just started practicing, and we kept asking ourselves why we stopped playing music together. We were in a band 23 years ago called the Phlegmings. I asked Kerry to join and play bass, she played bass in another band we were in together called Rosey Palms. So in bringing both bands together, Spitting Roses seemed to be a perfect name. Then Mickie’s girlfriend Meg joined the band. It started with her just singing a cover by Heavens to Betsy which was called Terrorist, due to her being mugged. Meg was singing the song, and Mickie suggested Meg sing it in our band, then I asked her to be part of our band. Meg plays a mini Korg, and is very awesome. Kerry has recently left the band to move to Europe. We are bummed but we are going to keep going, it is a must.

How did you become a guitarist? Are you proficient in any other instruments?

It was because my father gave me a guitar, even though I know it was because he didn’t want to get me drums, he figured an acoustic guitar would be quieter. But when we moved from Mountain View to Sacramento, my second boyfriend won me an electric guitar from a radio contest. It was much louder than the acoustic. I play other instruments, but I always approach it as a kid, pick it up, play, have fun.

It’s gotta have passion, its gotta make you smile and sigh and maybe even make you teary. It’s all about the feels. I’d like to think our songs can help people, even if it is my hurt that is on display. Everyone knows hurt. I would rather be real than all sugar.

Who are some of your main influences? Who can we hear in your music?

It’s a secret.. No not really.. Bjork, Viv Albertine, Tori Amos, Kim Gordon, Kim Deal. Who can I hear.. Um I’ve been told B 52’s and Sonic Youth, and I always say thanks, because that’s major! I just hear us and it makes my heart happy, I know, I am a sappy fucker.

What artists with a message have made you change in any particular way and what was that change?

Joe Talbot from Idles. His all-around way of being is super inspiring. Kathleen Hanna. Her drive makes rainbows come out of unicorn’s butts. Bjork’s love and heartbreak is a love letter from a volcano. And what I get from these artists is keep at it, keep going, do it up, don’t stop!

What was the first music you bought, and what have you bought more than once in different format?

RUN-DMC was my first record, I love records.

What is your most prized music collectible?

My fav is Asia Classics 2 Peppermint Tea House by Shoukichi Kina. I don’t care who you are, or what mood you are in, put this cd on, and if you don’t dance you’re dead inside. I have one cd that has been played to hell and back and one still in a package for when the other one dies.

And of all time:

But there’s so much more.

Do you still buy cd’s and records or mostly use streaming sites? Which sites do you use?

Yes, I buy CDs and Records in stores and from bands I see. Bandcamp and SoundCloud.

What does 2019 hold for Spitting Roses?

Playing more shows, And hopefully recording, because that would be fun.

Like Loading...
‹ Tommy Vext Became Homeless So He Could Stay On The Road With Bad Wolves This Year
KILLCODE Drop Final Video In Trilogy Series For Show Me ›