Sacramento (California) based “science based power metal” band Helion Prime is the newest addition to the AFM roster. The group, founded by guitarist Jason Ashcraft, is active since 2014 and issued a self-released debut CD in 2016. AFM Records will officially release the album, titled “Helion Prime”, on February 24th worldwide. END_OF_DOCUMENT_TOKEN_TO_BE_REPLACED

ONLINE METAL PROMO and THE AUTOPSY REPORT radio show (UK) have partnered to offer “Metal Up Your Axe, Vol. 2”, a free digital download music compilation featuring a mix of 41 past, current and unreleased original songs from established and up and coming rock & metal bands from the United States, Australia, Germany, Italy, Spain and Bulgaria.

Bands featured on the compilation include:

Chad has been playing live with Helion Prime for the past year and everyone felt the right move was to just bring Chad in full time.

Chad will make his recording debut on the band’s second album which the band has already begun the writing process for.

Chad has checked in with the following comment: “I’m very excited to be working with such a talented group of musicians and the future is looking very bright indeed!”

Their debut EP, “The Drake Equation”, followed in 2015, and Helion Prime’s lineup eventually solidified with the addition of Jeremy Steinhouse on bass and Axiom’s Justin Herzer behind the kit. Almost precisely one year later, the group returned with a self-titled 10-track full-length: independently released by the band in mid-February of 2016 and already out of print!

Helion Prime recently announced their signing to US metal label DiveBomb Records for the re-release of their debut cd in summer 2016.

Sacramento, California science based power metal band HELION PRIME have released their brand new video for the song “Life Finds A Way” which comes off of their recent self titled debut cd.

Helion Prime guitarist Jason Ashcraft has checked in with the following comment:

“I am very excited to be releasing this video. Not only is it Helion Prime’s first music video but it’s mine as well. Releasing a music video is something I’ve been wanting to do for a very long time and have never had the opportunity until now. We really hope you are as pleased with the video as we are!”

The video was filmed and edited by Mike Sloat and his crew from “Roaring Mouse Productions” who have filmed videos for bands such as Machine Head and Testament.

Jason Ashcraft comments on Roaring Mouse Productions: “Mike has himself a great team and they were a lot of fun to work with. I look forward to working with him on future music videos weather it be with Helion Prime or Dire Peril.”

Iron Kingdom is setting off on a massive US Tour. Come help all of us show them a good time in Sacramento, CA!

Rising Up From Surrey, B.C. Canada, Iron Kingdom Is Leading the Charge of the Rising New Wave of Traditional Heavy Metal Movement .

Inspired by the legendary pillars of Heavy Metal such as Iron Maiden, Judas Priest, Blind Guardian, The Scorpions, and Rush, this four piece machine are bringing back the classic sounds and foundations of 70s and 80s Metal.

The band released their debut album ‘Curse Of The Voodoo Queen’ on December 14, 2011, featuring past members Jordan Wright on rhythm guitar and Amanda Osterman on drums. Jordan Wright left the band, after the albums completion and before its release, and was replaced by Kenny Kroecher in the fall of 2011. Kenny Kroecher adds the excitement of duel lead guitars and intricate guitar rhythm work as an excellent compliment to Chris’ guitar style. In 2013 the group entered the studio again to record their 2nd full-length release titled ‘Gates of Eternity’ released on April 26th 2013.

The four then spent some time on the road, heading through Canada, Western USA, and onward to Europe. The European leg included shows in Germany, Poland, The Netherlands, France and the United Kingdom. The gigs in Germany included a performance at the iconic KEEP IT TRUE XVII festival. Thus creating some major momentum as now Iron Kingdom were spreading their moniker far and wide in support of the first two releases.

On July 30th 2015 Iron Kingdom released not one but two more albums, ‘Ride For Glory’ their 3rd full length album, as well as ‘Unleashed at the Kraken (Live in Seattle)’ a live album recorded on a previous tour. The band set out on tour again in support of the two new releases. The tour was unfortunately riddled with many trials, including a vehicle accident that almost killed the band members. Following the tour, Amanda decided to focus on other things in her life and stepped back from the band to pursue other commitments. Leaving the door open for the newest member of the band, drummer Joey Paul. With a solid new line up, Iron Kingdom is ready once again to take the world by storm, and lead the revival of the mighty and classic sounds of Traditional Heavy Metal.

Helion Prime was first conceived from a common love of metal and all things science. The band was founded when Jason Ashcraft (of Dire Peril) asked Heather Michele (of Graveshadow) to form a project with him. Between the two, they had worked with such artists as Mark Briody (Jag Panzer), Brittney Slayes (Unleash the Archers), Andy LaRocque (King Diamond), Ralph Scheepers (Primal Fear), Arjen Anthony Lucassen (Ayreon/Star One), and Niklas Isfeldt (Dream Evil). The concept; power metal with themes based on actual scientific theories with the occasional sci-fi tribute. The name Helion Prime was borrowed from an alien planet featured in the film “Chronicles of Riddick,” a movie the two were great fans of. She accepted the exciting proposition without hesitation. The two recorded their first demo track in June of 2014, and with the help of members from Dire Peril and Axiom, Helion Prime debuted their first live performance in August 2014 at the Boardwalk in Orangevale, CA. The dynamic duo then released their first EP on February 26th, 2015 with a full length album in the works. Helion Prime’s lineup was completed after bringing Jeremy Steinhouse on bass and Justin Herzer (of Axiom) on drums. In August of 2015, Helion Prime set out on their first tour, playing shows in Oregon, Nevada, California, and Utah. Their debut album is set to be released in early 2016 and will be featuring special guest Niklas Isfeldt of Dream Evil. Stay tuned all you power metal fanatics! 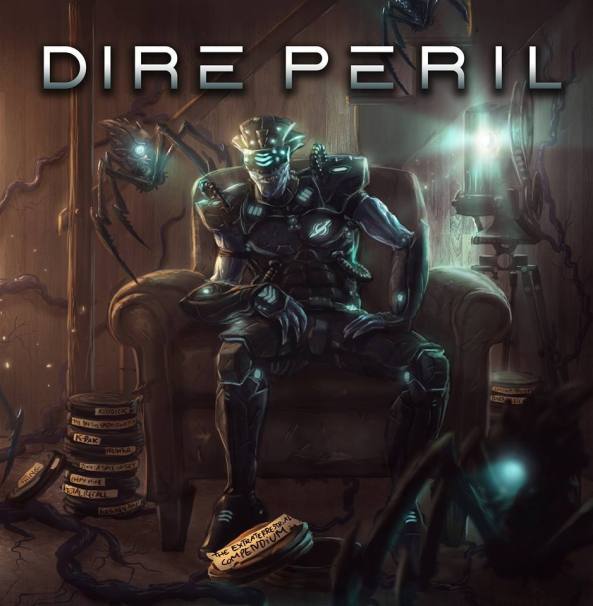 Sacramento, California based power metal band DIRE PERIL have released the artwork and track list for their upcoming full length debut album “The Extraterrestrial Compendium” to be released during 2016.

Dire Peril guitarist Jason Ashcraft has checked in with the following comment:

The band just ran a successful indiegogo campaign to raise funds for the new album and as a promise for reaching our stretch goal, we are releasing the album cover artwork and track list early to the public. The artwork was created by french artist Gwen Vibancos.

The album will be mixed by Carlos Alvarez of Dirty Viking Audio Productions and will ultimately b mastered in France at Tower Studios (Ayreon, Megadeth)

Jason states: The new version of the song “Queen of the Galaxy” (2015) is a re-recording from the band’s EP of the same name and will once again feature Unleash the Archers vocalist Brittney Slayes. “I always knew I would want to redo a song from one of the first Dire Peril EP’s as the production was never quite there in terms of what I wanted for the band. When the time came to choose a song, I felt this one fit the theme of the album perfectly.”

“The theme behind the album is that each song is based off a different sci-fi related film: Predator, The Day the Earth Stood Still, Enemy Mine, K-PAX, Forbidden Planet, Total Recall, Barbarella, Starship Troopers, The Thing, The Riddick Series and 2001: A Space Odyssey”.

“I can’t wait to get this album out. It has been a long time coming for Dire Peril to release a full length and honestly something that should have happened long ago. We are hard at work right now getting this album recorded and more news will follow to include the album release date”.

Sacramento, California up and coming science fiction power metal band HELION PRIME self titled debut album is scheduled for an independent release on February 15, 2016 and can be pre-ordered now as either a physical or digital copy at the band’s BandCamp

All pre-orders will be able to immediately download the album’s new single “Into the Black Hole” featuring a guest guitar solo from Jeff Teets of Allentown, Pennsylvania progressive metal band Mindmaze.

“Everyone in Helion Prime is very excited to finally be able to announce the release date for our debut album. We appreciate every single one of you for being patient and dealing with the ups and downs of making this album. This has been a long journey but we feel that we have created a very strong album and that the wait will be worth it. We can’t express enough how much you all mean to us and we hope you enjoy this album as much as we do. A huge thank you to every fan, friend, family member who has helped make this possible. You are all amazing.” 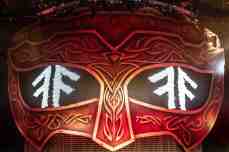