On March 5th, 2017 our very own Morgan McCormick rolled down to the St Petersburg State Theater for a face to face with Reece Scruggs, lead guitarist of Havok. They were opening for Suicidal Tendencies on the “World Gone Mad” US tour. Here is Morgan’s review of that show.

Back in July 2016, Suicidal Tendencies announced their US “World Gone Mad” tour two months prior to releasing their latest album of the same name. The opening bands were Crowbar and Havok. A very interesting must-see lineup. I’ve been a fan of Suicidal Tendencies for a long time, and I knew I had to go. Crowbar and Havok are two other bands I also really enjoy seeing live as well. I thought that the show being on a Sunday would hinder the turnout, but that wasn’t the case at all. The venue sold out entirely, which is saying a lot considering it’s medium sized with a second story balcony. The place was packed like sardines by the time Crowbar went on. Security was really tight (as per the usual for that venue) but they kept things running pretty smoothly and got everyone inside in a timely manner. Communication was easy with all the staff and getting around was fine despite the overwhelming amount of people. I chose to just go around to the back door every time I needed to take closer photos because there was just no way I was getting through that tightly compressed crowd.

It was a beautiful sight to see such a turnout though, especially on Sunday night. It gives me hope. All the bands definitely delivered. All three of them put on an impressively well-executed show that was entertaining at all times. None of them wavered their energy and the crowd reflected that as well. Havok who I had interviewed lead guitarist Reece Scruggs (link here) earlier in the day and he mentioned how he sometimes holds up an Intercontinental Championship belt when he goes on stage. I was looking forward to seeing that but he didn’t this time. I think the place was already sold out at this point, so I could tell they were all in their zone. They didn’t waste any time once they got on stage. David got the crowd pumped with short politically-based speeches every now and then, but for the most part they were just shredding their asses off. Their performance was a nonstop explosion of pure thrash and the crowd was nice and rowdy. A healthy pit was maintained almost the entire time, and photographing Havok was great because of the ferocity they maintained at all times.

Setlist: 1. Inro 2. Point of No Return 3. Claiming Certainty 4. Hang ‘Em High 5. Prepare for Attack 6. Intention to Deceive 7. Give Me Liberty…or Give Me Death

I thought the addition of Crowbar was one that was a little weird. Not really weird, just out of place. I’m not complaining though because I love their music. I actually thought the timing when they went on was brilliant. Everyone was super exhausted after Havok so when Crowbar went on it was just time to chill. Their performance was well received by most and I noticed everyone feeling the groove. I was super satisfied with the setlist, they played almost all the essentials and crowd favorites (or at least my personal favorites). They kinda glided right through their performance though, not a whole lot of extra energy going on but it’s understandable. I could tell they were building everyone’s anticipation for Suicidal and they led the show onwards in the only way they know how. Very heavily.

Suicidal was obviously the band everyone was here to see. You knew it damn well because of the enormous volume of flip hats, bandannas, and gym shorts walking around. They must have made a killing on merch sales, I swear I kept seeing more and more of the ST flip hats popping up and that was pretty cool. They didn’t have to build any hype once they got on stage, the crowd was ready to go. Mike and all his glory had the energy of a twenty-year-old up there. The energy and movement coming from that stage was unbelievable. Dave Lombardo was a perfect fit for them and shined through with his flawless drumming. 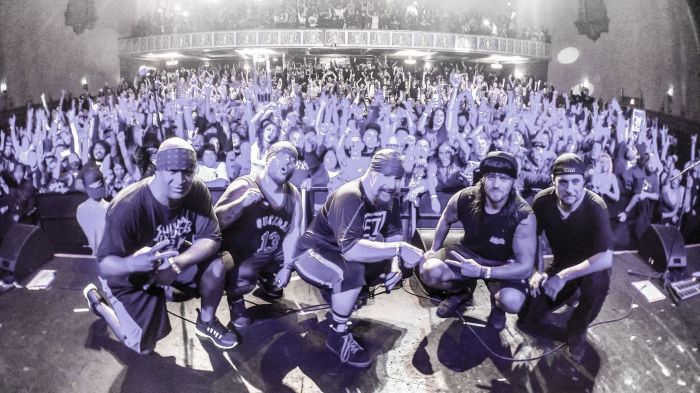 The rest of the members kept up the energy just as much as Mike did, and I’m glad no one tripped because as far as I could see they weren’t wireless. But they were all over the fucking place. Speaking of which, so was the crowd. Which was tough because at the ST Pete theater security doesn’t allow crowd surfing so everyone had to keep getting thrown off. Eventually, ST did what they usually do and they let a bunch of people come onstage with them which is always nice to see. Thier setlist was on fire. I was a little worried that they’d play more of their new stuff to promote the new album (which would still be awesome of course) but they mostly played the universal classics that everyone loves them for. It was an absolute riot.

Setlist: 1. You Can’t Bring Me Down 2. I Shot Reagan 3. Clap Like Ozzy 4. Freedumb (followed by band introductions) 5. Trip at the Brain 6. War Inside My Head 7. Subliminal 8. Send Me Your Money 9. Possessed to Skate 10. I Saw Your Mommy 11. Institutionalized 12. Cyco Vision 13. How Will I Laugh Tomorrow 14. Pledge Your Allegiance (audience invited on stage)

All in all I’d give this show a 4.5 out of 5. The venue was large enough to fit plenty of people but small enough for the performance to still be intimate. The stage is a little small which sucks, but it’s high up which probably helps with shit getting touched or knocked over by the crowd. Every band knew exactly what the crowd wanted and delivered it while seeming to have plenty of fun in the process. The lineup was on point. You just don’t get the chance to see shows like this every day. So here’s to hopefully plenty more tours like this in the future!