Robb Flynn, frontman of San Francisco Bay Area metal titans MACHINE HEAD, has just announced a special birthday show in his honor. The event is set to take place at the Oakland Metro on July 22nd, and will feature a plethora of special guests, including the man himself. 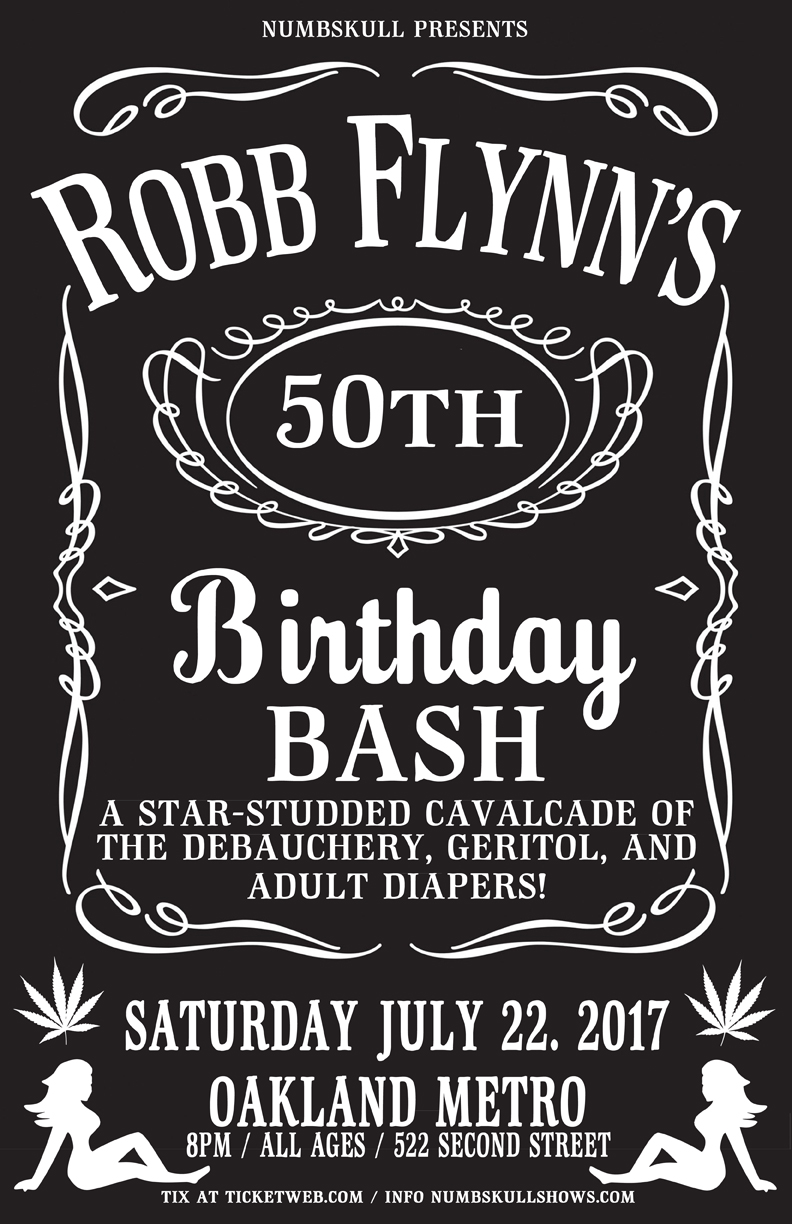 MACHINE HEAD has released the following statement regarding the event:
“Yes ladies and gentlemen, this July our fearless leader Robb Flynn will officially be a Quinquagenarian?!

“- In Led Zeppelin terms, that’s halfway up the stairway to heaven!
– In fact, at 50, he’ll spend more time trimming his nose hair than his head hair!
– Hell, the best form of birth control for Robb at this is point, is nudity!
– At 50, he’s entered the Stone Age… gall, kidney, and bladder.
– He’s seen it all, done it all… but can’t remember most of it!
– That’s right, his back goes out more than he does!
– Turning 50 means he’s so old that “doing it three times a night” is how many times Robb get’s up to pee!
– At 50 he’s stiff in all the places he doesn’t want to be, and needs a pill to get stiff in the places he does!
– Christ, his wild oats have just turned to porridge!

“In honor of the inglorious occasion, the youthfully challenged yet chronologically gifted frontman will be celebrating with a concert performance on Saturday, July 22nd at The Metro Operahouse in Oakland, CA. and features a cavalcade of D-List rockstars, has-been’s, and never-was’s, such as Fuckin’ Joe Cabral and Robb himself.

“The debaucherous, alcohol-drenched event will likely be viewed by future generations as “the greatest show of all-time”, and is sure to make him an official charter member for the “Old Farts Hall of Fame”!

“He only turns half-a-century this year, don’t miss this once in a lifetime event!

“Tickets go on sale this Friday at noon California time.”

MACHINE HEAD recently wrapped up the tour cycle for their first Nuclear Blast Entertainment album Bloodstone & Diamonds, where they toured for 20 month and performed a whopping 283 concerts on 5 different continents around the world.  Around 250 of those shows were performed as “An Evening With MACHINE HEAD” with no support bands and performances often lasting 2 1/2 to 3 hours in duration. Three tours of the United States, three tours of Europe, (including multiple dates in Russia and Greece), shows in Mexico and South America, a completely sold out run of 9 Australian / New Zealand shows, sold out dates in Japan,and their first ever plays in Taiwan and Thailand, and all without any festival performances which the band publicly announced they would stop performing at in 2014.

MACHINE HEAD’s latest track “Is There Anybody Out There?” cracked the Top 40 on the Active Rock chart in the United States. It marks the first time for any Nuclear Blast artist to enter what is widely considered to be the “official rock chart” for the United States, and only the the third time the band has charted in the Top 40 in their illustrious career.

Support us as we support music!

Like Loading...
‹ Niviane release promotional teaser video.
Me First and The Gimme Gimmes Added to It’S NOT DEAD 2 Lineup!!!! ›