Aww, DIMMU BORGIR. The band that divides the black metal fan base like Donald Trump has divided America, have released their latest magnum opus “Eonian”. After “Abrahadabra”, I was really expecting something similar. I couldn’t have been more wrong. While the aforementioned album was just bland and boring, this album is the complete antithesis of that album. Black metal “pursists” are going to hate “Eonian”, and that’s too bad, because they are missing out on one hell of an album. 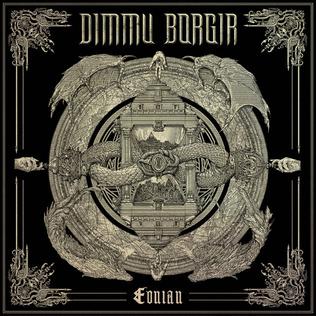 The 8 years between albums seem to have recharged Shagrath, Silenoz, and Galder, because this does not sound like an album they put out just for the sake of putting out an album. The only hint of black metal left in DIMMU BORGIR at this point is the raspiness of Shagrath’s vocals. Other than that, they have morphed into some kind of atmospheric misanthropic orchestral anti-christian symphonic metal.

This album is pure excess. Over the top orchestra, sometimes too much keyboard, sometimes a little too much “shit, what song were we playing?”. But somehow it all all works. It all fits, in that weird DIMMU BORGIR way. It would be a disservice to pick out a certain standout song on this album because it needs to be taken in all at once. It’s almost as if “Eonian” is a concept album without intending to be one. Like any Dimmu Borgir album, it has excellent production. Every single instrument can be heard, and comes through crystal clear. As much as 2010’s “Ab” sucked. “Eonian” completely makes up for it. So let’s just all pretend that other one just never happened.

Is this “For All Tid”, hell is this “Death Cult Armageddon”? NO. This is a completely different kind of album. A mixture of of everything that the music that DIMMU BORGIR has both played and been influenced by. Like high grade cocaine and an expensive hooker, “Eonian” not for the faint of heart.

Like Loading...
‹ MORTIIS Reveals the Re-Release of Perfectly Defect
Jadran “Conan” Gonzalez of Exmortus “Expect your mind to be blown. To melt from all the shredding.” ›