CULTURAL WARFARE Guitarist KEVIN DOUGHTY – “Prince was a badass on every instrument, the ultimate artist”!

Hailing out of Oakland, California, Cultural Warfare is comprised of five seasoned musicians with common goals – Vocalist Jacques Serrano, Guitarist Billy Garoutte, Guitarist Kevin Doughty, Bassist Pete Aguilar, and Drummer Bones Padilla. Together they create music that stays true to the classic Bay Area sound of its time while creating a modern twist in the music to create a melodic yet aggressive sound within the unit.

How did you first get into music? Who or what turned you onto metal?

I’ve always loved music since I can remember as a child. My parents were very diverse as far as listening to everything from Outlaw Country, Rock, Blues, and Motown music. This has lead me to love all types of music, but I really was turned onto Metal by my Uncle Ed who went to school and grew up with Cliff Burton in Castro Valley. He had this massive stereo in his garage man cave. His house was behind ours and I would always hear vinyl he was spinning because nothing he played was low volume. Anyway, one day I was out back shooting hoops and I heard this massive sound I’ve never heard before come out of his garage. I was I think 11 years old in 1986 when Metallica’s Master of Puppets came out. He just had bought the new album and Battery was playing, as it’s the first song… I couldn’t believe what I was hearing or how to describe it except I knew I loved it! I asked if I could sit with him and listen to the whole record. After that, I used my allowance to buy KEA, and RTL and dove into Megadeth, Exodus and the love for everything Metal began for me!

After I started listening too, and getting into everything Metal, the one thing I was most fascinated with was the crunchy, fast guitar playing! I thought it was the coolest thing ever. Randy Rhoads, James Hetfield, Dave Mustaine, Alex Skolnick, Tim Calvert etc… I loved them all! My pops bought me a cheap nylon string acoustic that I still have actually, when I was 12 years old, and told me to prove to him I really wanted to learn before he would consider buying me an electric guitar. So I would sit in my room and learn chords and listen to music and try to figure it out. I met some kids that were like minded through a mutual friend that were already learning Bass Guitar, Drums, and Guitar and we started hanging out. The rest is history.

How did you become a guitarist and a drummer? Are you proficient in any other instruments? Have you always been creative?

Well, as I stated in the last question, I was and always have been a guitar player first. As far as drums are concerned, I really started to learn and play drums out of necessity, because it was always hard to find a good drummer who could play like Tom Hunting, Dave Lombardo, or Paul Bostaph. That was who I was inspired by and influenced by. Of course if you are a rock or metal drummer Neil Peart has to be on your list too! So, I decided I was going to learn how to play. I don’t remember honestly how I bought my first kit which was a black Pearl Export cheap kit, but I did and just started wood shedding to learn the basics and went from there. I love both instruments, but Guitar is truly where my heart is! As far as being creative, I think my favorite part of being a musician even more then playing live is writing music. I love being creative, and playing guitar and writing music has always been my escape, my outlet, and my stress reliever!

Billy and I were both inspired by the 80’s Thrash Scene and wanted to form a band with that vibe, but our own style. We both are big fans of classic Metallica, Exodus, Testament and Forbidden. Also, love Arch Enemy, Nevermore, Santuary, Judas Priest etc… Those were major influences forever! As far as now, there is many bands I personally love! Mudface, The Watchers, Monster God, Space Vacation and on and on. Literally, there is so many great bands out there and I couldn’t possibly mention them all. The scene is alive and strong and CW is proud to be a small part of it! 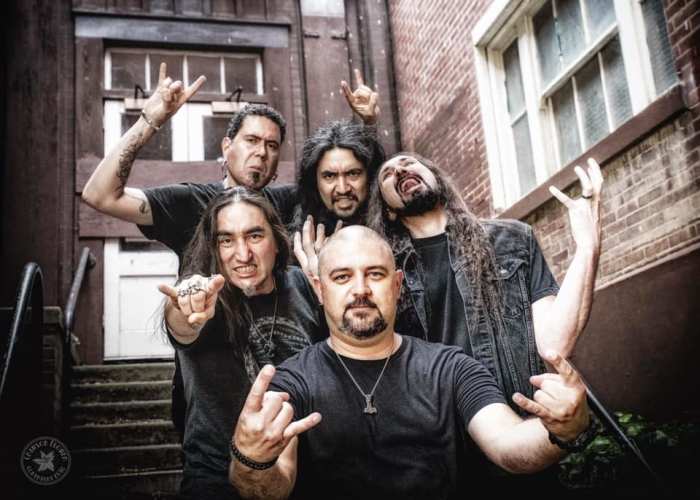 How did Cultural Warfare come about? Where did you develop the name? Where is it derived from? What other band names were considered? How would you best describe your sound?

Cultural Warfare came together the end of 2010. Billy Garoutte and I had been trying to start a project for a few years prior to that and it never panned out for whatever reason we could never find like minded musicians. Billy had started a death metal project called Sarcosis, and had that going for a bit. Anyway, in 2010 we came together with me on drums and started writing some tunes. Billy had a friend Pascal who he grew up with that was interested in giving it a try with us on Vocals. He had just moved back to California from Florida. We added our Bass Player at the time Terry and came out with our first EP Ratten Krieg in 2012 I think. We had good responses from the scene at the time and played around a lot locally. That’s how it started. The name came from Pascal at the time. He was big on writing lyrics about historical or current events. The name fit! Our line up now though…. I couldn’t be happier! Jacques Serrano is the vocalist we had always hoped for this band! Pete Aguilar is a beat on the 4 string fiddle, and Bones Padilla is talented and just gets us and what we are trying to do. Also, I’m playing guitar which I am ecstatic about!!! Describing our sound is for others to do. We write music for us first and foremost!

Is there a theme, that runs throughout your new album Warmageddon or is it just a collection of songs? What was the process of putting the songs in order?

All of the above… Songs like Warmageddon, Blood Machines, and New Beginnings are about Post Apocalyptic Aftermath in the future and A.I. taking over if we are not careful with how technology is advancing into the future. Eyes of the Land, Divided we Crawl band Politikill are more to the name of our band. Cultural and social events. Fury is about Bruce Lee and the other tunes are fictional stories of witchcraft and death… Something for everyone!!!! LOL

Name the one album that epitomizes your style of metal over all others.

I don’t think there is one Album that epitomizes CW because each member is influenced by different bands and music. Me personally, I have a few albums that really molded me into who I am, but since you are asking me for one, I will go with Forbidden “Twisted into Form”. This album came out in 1990, but truly blew me away… It had the Halford vocals in Russ, the killer technical drums and low end with Bostaph and Camacho, Craig’s guitar riffs and song writing that was way ahead of its time, and the introduction to Tim Calvert. Just an amazing guitar player. That album never gets old for me! I still to this day have it on rotation for inspiration and just to rock out! That album and lineup was magic!

Hmmm…. There’s so many I could put together at least 5 bands with musicians who influence me or have impacted my life, but today I will go with some of my influences who are no longer with us. Randy Rhoads and Tim Calvert on guitar, Ronnie James Dio on vocals, Nick Menza on drums and Cliff Burton on Bass! Wow, that’s a line up right there!!!

What kind of gear is bringing us the Cultural Warfare sound?

From a guitar perspective, Billy and I are endorsed by Dean Guitars and Sfarzo Strings which we use exclusively live and on the recording. EVH Amplifiers and speaker cabs and various pedals. Pete Aguilar uses Yamaha Bass Guitars and Peavey Amplifiers. Bones Padilla uses Mapex Maple Mydentity Drums, Paiste Cymbals, Evans Heads and Promark sticks.

LOL, the first album I bought for myself with my allowance was probably in 84 when I was 9 years old and it was Prince “Purple Rain”… I don’t care if this gets me grief from metalheads! Prince was a badass on every instrument, and dude was just the ultimate artist!

Top 5 albums or songs released in the last 12 months and/or all time?

Wow… this is tough, but I’ll go with 5 of many albums that influenced me… No particular order Ozzy Osbourne Diary of a Madman, Judas Priest Screaming for Vengeance, Metallica Master of Puppets, Forbidden Twisted into Form, Testament The New Order.

Metallica Master of Puppets because without this album I wouldn’t be… Garth Brookes Double Live Album because no artist has passion or a voice like Garth (another reason for Metalheads to give me grief Lol), and Ozzy Osbourne Randy Rhoads Tribute Live Album because I couldn’t go the rest of my life without hearing Randy’s music and guitar playing.

What does metal mean to you?

Growing up for me it meant angst, youth, rebelling, aggression and belonging. Today it means passion, love and life!

Thank you for interviewing me and showing interest in my band Cultural Warfare, our new album Warmageddon released on our label, M-theory Audio. Check our label out as they are dedicated to bringing new fresh bands to the surface. We are part of an awesome family and something much bigger then us. I’m very happy and fortunate to be able to express myself musically with my band mates, and have our music spread worldwide for people to hear. Thank you to all our friends and fans who support us. Peace \mm/

Like Loading...
‹ PORTRAYAL OF GUILT Drummer James Beveridge – “My dad surprised me with a kit when I turned 11”.
OVERKILL Launch “Welcome To the Garden State” Documentary Series Part 1! ›