At The Gates Release New Video Clip For “The Mirror Black”

Swedish melodic death metal pioneers AT THE GATES have just kicked off their massive European tour with Behemoth and Wolves In The Throne Room in support of their recent acclaimed album To Drink From The Night Itself. In addition to the tour, the band have also released the limited edition 7″ EP, The Mirror Black, and the Digital EP, With The Pantheons Blind, today.
Topping it off, AT THE GATES are also debuting a video clip for the track “The Mirror Black” featuring guest vocals by Rob Miller (Amebix, Tau Cross). The clip was created by Costin Chioreanu / Twilight13Media, who also is also responsible for the artwork duties of the entire To Drink From The Night Itself release. Check out the video below.
“When we decided that we wanted to release the two Rob Miller tracks on a separate 7″, we felt that ‘The Mirror Black’ was worthy of its own video,” states Tomas Lindberg (vocalist) about the release. “Costin was already excited about the idea, and I explained the basic outlines of the idea of the song. Working with Costin always brings in another dimension to our music and my lyrics; so he did his own interpretation of the main theme of the song. I am super happy with the result, I really think that this is one of the best videos AT THE GATES have ever done. There are a lot of hidden meanings and other symbolism in this clip, so you can watch it many times and still find new stuff. We as a band are super excited about this release!”
The 7″ EP features the two songs “The Mirror Black” and “Daggers Of Black Haze” off AT THE GATES’ current album To Drink From The Night Itself and feature guest vocals by Rob Miller (Amebix, Tau Cross).
AT THE GATES – “The Mirror Black” 7″ EP (2 Tracks) – Tracklist:
Side A: The Mirror Black (Featuring Rob Miller) (04:38)
Side B: Daggers Of Black Haze (Featuring Rob Miller) (04:47) 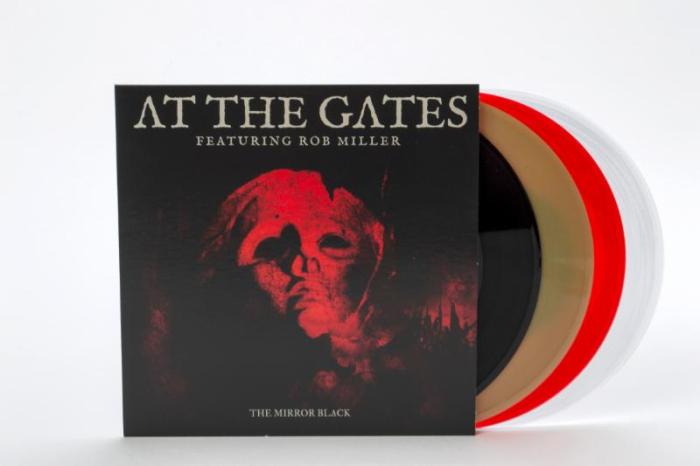 Like Loading...
‹ THE DANDY WARHOLS Reveal “Why Are You So Crazy” Album Details
Watch Video of POSSESSED’S Entire Oakland Performance ›

Tags: at the gates