Dark Descent Records will release the album in North America with Century Media handling Europe. The album is set for worldwide release on November 22. 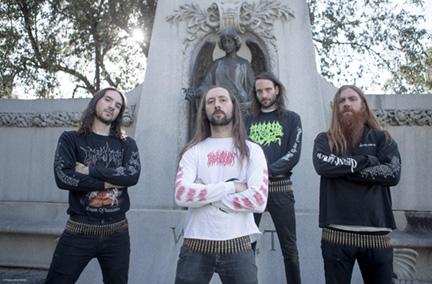 Featuring classic 1970s artwork by Sci-Fi god Bruce Pennington, Hidden History of the Human Race promises to be both a meditative inquiry on the Mystery & Nature of human consciousness, and a dynamic foray into the realms of progressive, brutal & atmospheric death metal, as revealed by BLOOD INCANTATION.

BLOOD INCANTATION – Hidden History of the Human Race
1. Slave Species of the Gods
2. The Giza Power Plant
3. Inner Paths (to Outer Space)
4. Awakening From the Dream of Existence to the Multidimensional Nature of Our Reality (Mirror of the Soul)

BLOOD INCANTATION are currently on “The Last Atonement Tour”, which will take them all across the USA with dark death metal pioneers Immolation!

Like Loading...
‹ Wacken Metal Battle USA 2020! Your Chance To Play This Years Wacken Open Air Is Here.
Athenar of MIDNIGHT – “Putting out a record on the same label as Slayer and Nasty Savage it’s pretty surreal” ›