AXIAL – “Conflict of Mortals” (Self Released)

Guitar virtuoso and song writer Joel Guernsey (Omnious Ruin, Ex-Inanimate Existence) and drummer Aaron Harmon have teamed up for their new band Axial. Their debut album Conflict of Mortals drops May 12th and can be purchased on their Bandcamp and will be available on all main streaming platforms. The instrumental technical death metal record is filled with heavy 7-string guitar riffs, memorable melodies, precise and articulate drumming, and complex orchestral programming. 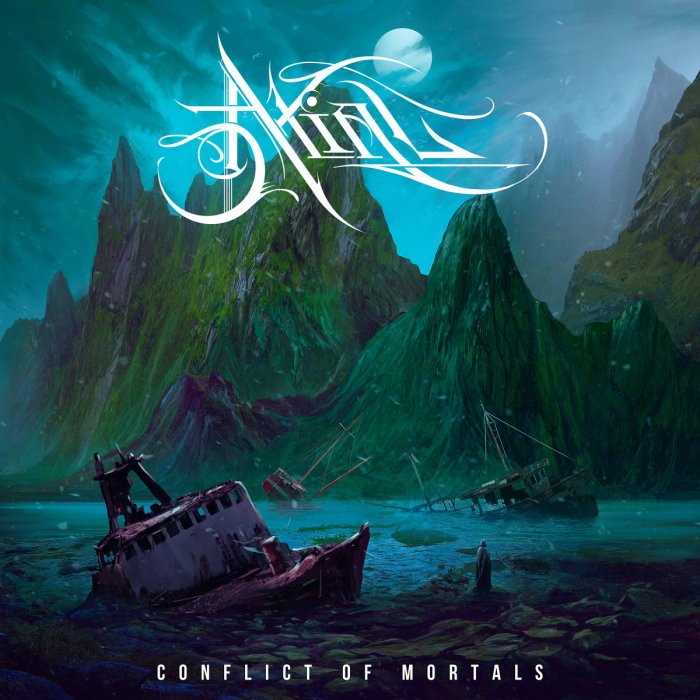 Compared to prior releases from Guernsey, this record stands more experimental in the sense of more virtual instruments in the background and soundscape themes that embody a mystical but tasteful journey. The aspects that really grab me from this album is the song writing in general, production and killer drumming.

The album opener “Hexes From The Nether Realm” takes you all over the place in direction but is still consistent and intriguing overall. There is some guitar galloping and arpeggio lines along with syncopated drum accents throughout.

“Return to The Depths” which is probably one of heaviest numbers on the album has some really cool middle eastern vibes in the harp intro melody. The song takes a quick twist for a few seconds towards the middle with an almost industrial vibe drum machine or electronic drums. The harp melody comes back in towards the end correlating in an even more haunting resonance.

“Wreckage” which is probably my favorite track on the album, has incredible melodies sprinkled throughout. There are also underlying synths or choir keys in the background that evokes even more emotion. This song is probably the most technical and memorable at the same time. Towards the end, there is a rhythmic outro riff that sounds similar to an intro riff of Inanimate Existence’s song “Dueling Shadows” which I really loved also.

“Reptilian Vortex” is another great one where guitar harmonies are everywhere and really drive the heavier rhythm chords behind it. All dueling guitar lines coincide perfect and are just constructed extremely well. There are some insane drum fills and variety of tempo changes in this one also. The 2:26 minute mark brings the ultimate headbanging riff along with an amazing shredding lead on top.

“The Frozen Talisman” is a short track but filled with intricate note weaving on the programmed harp. There are neo-classical attributes and an atmospheric layer behind it. A 1-minute masterpiece.

Overall I would give Conflict of Mortals an 8.5 out of 10. My only subtle critiques would be that I feel the album needed maybe one more song and possibly a little longer guitar solos. But at the same time, song writing and themes were so much at the forefront that the songs themselves speak enough. I highly suggest this album to anyone who is into instrumental tech death or progressive song writing. I would absolutely love to see this played live one day and cannot wait to see where Axial’s future releases go.