As soon as the lights came on, the band members entered the stage one by one, (Mr. Pharmacist, Sammi Doll, Dave Parley and The Contortionist), each held roses in their hands and then proceeded to throw them into the crowd, last to enter the stage was KAT VON D, wearing a long black gothic style dress.

KAT VON D performed songs from her debut album Love Made Me Do It.The songs had dreamscapes and 80ish style Synth-wave with a modern twist that made me feel like I was in the world of Blade Runner (movie) or cyberpunk.The performance had it all, from fantastic visuals with gothic elements, great contortionist work by the incredibly talented Brynn Route specially during the song Interlude.KAT VON D nailed the vocals, and her vocals skills shinned the most with the songs Fear You, Exorcism, Enough and Vanish.

KAT VON D had support from Prayers an electronic rock duo of southern California that consist of Dave Parley on synthesizers and Rafael Reyes aka Leafar Seyer on vocals. The music from Prayers can be describe as synth-punk with a little bit of hip hop and lyrics about life is on the streets. Tons of planning and work must have gone into both acts, and it paid off, the performances were nothing short of spectacular. From tattoo artist to tattoo world breaker to modeling to business entrepreneur to musician, is there anything KAT VON D cannot do? 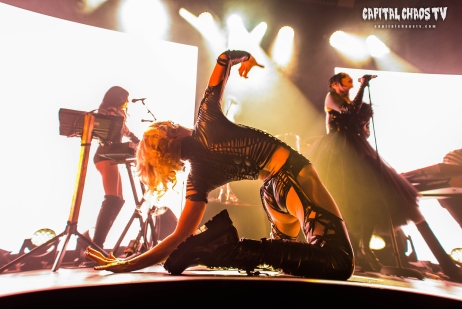