Interview with Jesse Ketive of Emmure

Jimbo Patton of Capital Chaos TV and vocalist of Central Valley Death Metal maniacs Incisus sat down with Jesse Ketive lead axeman of Emmure on their recent Oakland, California appearance with Volumes, Sworn In, Gideon & Thy Art Is Murder. 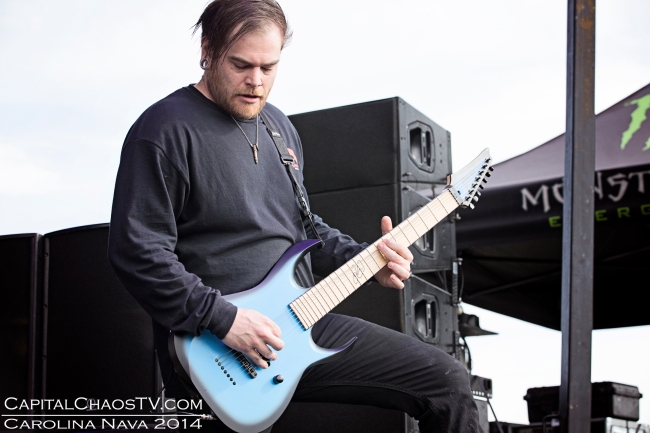 Jimbo: Sounds good, so have you guys played here before?

Jesse: We were here definitely one other, maybe two times, but I’m gonna definitely say one time. I remember we pulled up, I remember the supermarket place, or the tool place across the street, I remember some key things. I had some friends hit me up, so I was like now I remember.

Jimbo: Awesome, so it brings back memories

Jesse: Yeah it was a good show, I remember seeing a good sized place. I wish all medium sized venues were like this. Some are layed out like to the left, and it’s weird and makes things awkward, but this is great.

Jimbo: Yeah it’s a really cool place, it’s my first time being here, so it’s really nice to be able to catch a show here.

Jimbo: Definitely, So how’s the tour going for you guys so far?

Jesse: Umm, it’s been great, it’s been like 90%/85% selling out al the shows. A lot of like B market C market smaller places, little places on the map, but there’s enough people that want to come see all the bands you know, it’s a great line up, it’s a slamming deal so tour’s been going really good. We got like maybe more than a week left, or 10 days, maybe 11, maybe I’m counting too fast

Jimbo: Nice, any particular dates you’re looking forward to, or any that you just played that stood out as really good show?

Jesse: Denver was, but Denver is always amazing we play there a lot. But Denver this time was over the top, it was like a sporting event. It was crazy. California is always really good ever since we’ve been coming here since like 2006 or 7, ’06 was our first tour, so ever since then it’s been love and love and love, so the whole West Coast is a good time, so these next few shows, you know Arizona, California, the whole West side, I’m excited for that too.

Jimbo: So any word on the new album coming out, it’s coming out here pretty soon right?

Jesse: Yes, next month April 15th, so less than 3 weeks out. We got two or three songs out there that they released you know on iTunes that we got on the internet, and we’ve had a really good response, really excited. My personal opinion is that those songs are awesome and nothing can compare to that. The rest of the album is 15 songs, it’s so much, I’m really pumped on that, good stuff.

Jimbo: Nice, I’m really looking forward to hearing that. You playing a bunch of the newer stuff here tonight?

Jesse: Uhh, we do one song “Nemesis”.

Jimbo: Oh the one you guys had released right?

Jesse: Yeah, we do it on tour, the response has been great, it’s exciting, it’s good to know that people are still excited. With six full-length albums, you never know what to expect.

Jimbo: Yeah, it definitely looks like it’s going to be awesome though, I heard Nemesis it was good, so it looks good so far.

Jimbo: No problem, so any particular songs that you guys just really like to play live , or any songs that seem to stand out in your mind?

Jesse: It’s weird, I think Children Of Cybertron is my favorite because when we first wrote it and put it out we rolled the dice thinking, “Alright, it’s pretty heavy, let’s see”, and people loved it, people still love it. Then usually at this point, not to give it away even though you can find it right on youtube, but you know at this point in our career we play that towards the end of our set. So at that point we’re sweaty, drunk, whatever, and it’s like exciting, it brings you back and you’re just bouncing around. It’s definitely one of the most fun to play live at this point.

Jimbo: That’s awesome. So I saw you guys have an upcoming tour through Canada with Upon A Burning Body I believe?

Jesse: Oh yeah the mini one.

Jimbo: Yeah I think it was four or five dates, have you guys played in Canada before?

Jesse: Oh yeah, we’ve been to Canada so many times. Canada is like a home base number two because it’s so close to home, yet so far you know. It’s a six hour or eight hour drive to the border. In Montreal we recording our EP, our first EP. We have just done a lot of Canada dates, we have a nice fan base there. Toronto, Montreal, all the surrounding places, you know the whole belt that’s going up there from Buffalo, pretty much we’ve played since 2006-7 you know. It’s gonna be a lot of fun, those guys are really cool too.

Jimbo: Oh yeah, Upon a Burning Body those are some sick guys, those are definitely going to be some sick shows. Are there any particular bands you really like to tour with, or that you’re really good friends with or anything?

Jesse: Oh man it’s tough because you with homies I like to walk up see what the guys are doing, and I’m always the dude like ya come on let’s smoke it. You know when we’re together everyone just hangs, but there’s so many bands that I’ve made friends with in the past, I would feel bad to start naming some, and leave some out by accident. But so many homies I have, anyone we’ve toured with I mean. We have so many friends on tour, so many times, dudes like After The Burial, and Suicide Silence, just so many bands I can’t even begin. We’ve toured with them you know  3,4,5,6,7,8 times.

Jesse: Yeah, so for all my homie’s out there.

Jesse: I mean yeah, shout out to the fans, all the people that will watch this, and um leave positive and/or negative comments. I think I spoke pretty well, he spoke pretty well, so hopefully all positive comments. And everyone that’s been coming out to The Mosh Lives Tour, everyone that’s gonna come see us in Europe this summer, all the festivals. Anything else in the future for us, we really are happy to be doing this for 10-11 years now. The fans keeping it going when we’re at our lowest and want to go home and want to see our family after weeks straight of touring, we get to go home for four days, then back on tour. It’s those people that come out to those shows, that let us know you know what that was a sick show. You know thank you to our family and friends, and definitely fans.

Jimbo: Well we’ll wrap this up here, definitely looking forward to seeing your guys set, and hope everyone goes out and picks up “Eternal Enemies”.

Jesse: Yeah sweet this was fun thank you so much.

Jimbo: No problem, thank you

Jesse: Thank you so much

Emmure keep it simple and straight-forward, but this coupled with vocalist Frankie Palmeri’s brutal openness and honesty connects to people on a level that few others can. Everyone has demons and dark sides to their lives, but this group shows that everyone deals with these types of issues and that there are productive ways to let it all out. Emmure have gained the loyalty of the metal community and legions of rabid fans, but make no mistake if you disrespect them you will be left sleeping with the fishes.