The Force Fest is a festival focused on the different aspects of Rock and Metal. This festival was born in Mexico City in 2012, under the slogan of providing an alternative to all the public of Mexico City and the south of the country who were unable to travel to Guadalajara to attend the Hell & Heaven Fest for different reasons , but that nevertheless generated a great demand for shows of this type. 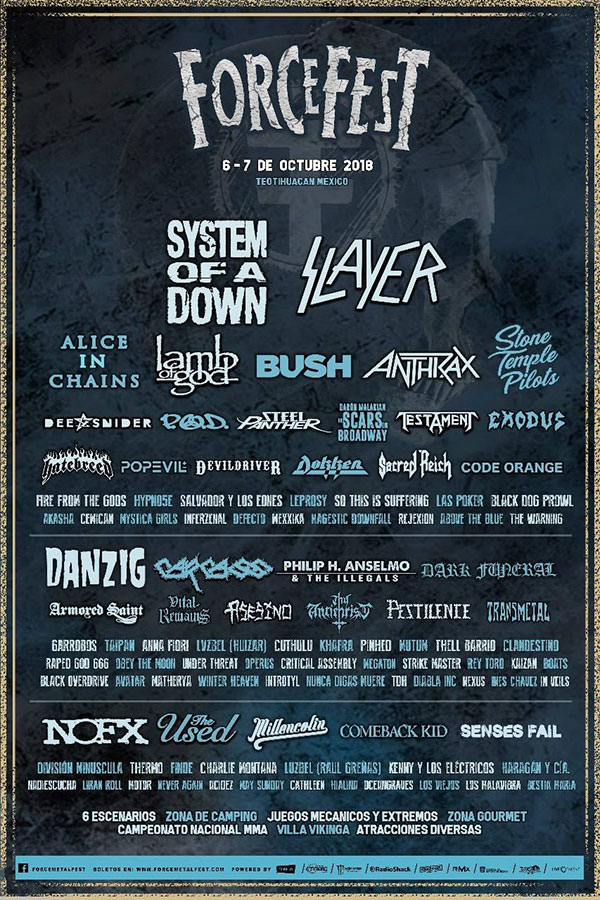 After being held on 2 occasions in Mexico City, Live talent organizing company of the event, decides to change venues with the Hell & Heaven fest and move the Force Fest to Guadalajara in 2015 obeying issues of production, marketing and logistics .
In this way the Force Fest arrived in Guadalajara becoming the 2nd largest Heavy music festival in the country.

The festival has had several of the greatest legends of extreme music in the world, bands like Judas Priest, Sepultura, Soulfly, Anthrax, Carcass, Overkill, Pod, Angra and the last presentation in Mexico of the legendary Motorhead.

The Force Fest will once again move from time to time to the State of Mexico looking for what it always dreamed, a 2-day Open Air Festival where the public could experience a complete camping area, more than 12 hours of continuous music, multiple stages and 2 days of Festival, This 2018 the Force Fest returns stronger than ever.