Home › Interviews › Vocalist MATTIA MARTIN of BAD AS – “I want to get to the soul of people”!

Vocalist MATTIA MARTIN of BAD AS – “I want to get to the soul of people”!

Coming off their recent tour supporting legendary guitarist Vinnie Moore (UFO) and recently releasing their new album “Midnight Curse” on Rockshots Records, Italian hard-rock band Bad As are sharing a new lyric video for their track “Black Star”, which can be viewed below.

Founded in 2016 by world-renowned bassist Alberto Rigoni (solo, Vivaldi Metal Project, former – Twinspirits) under the moniker BADASS, in 2018 the Italian modern hard-rock band turned into Bad As, featuring a brand new line-up and a huge step forward their unique and personal music style. While ‘Hard Rock’ is the starting point of Bad As, their debut album “Midnight Curse” is a melting of genres including metal and progressive as well as a mixing of influences in the style of legendary bands such as Metallica, Megadeth, Whitesnake, DIO, Symphony X, Alter Bridge and many others. “Midnight Curse” features unforgettable vocals and lyrics, killer guitars and a background wall of bass and drums. The band took some time to allow us to probe them. 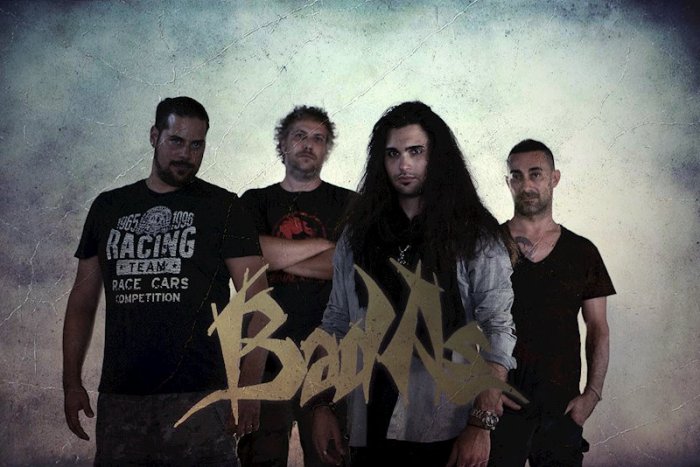 How did you first get into music? Who or what turned you onto hard rock?

Mattia Martin (singer): I got into music at the age of 6, when I had my first piano lessons. Then I started playing guitar and that turned me into hard rock!

Alberto Rigoni (bassist/founder): I’ve been listening music of any kind since I was a kid but I turned into hard rock quite late, when I was 15 years old, after a friend of mine introduced me to Dream Theater.

Alessio “Lex” Tricarico: I started playing classical guitar at 10 years old, and in those years, I listened only pop music, but When I was 14 years old, a friend gave me a Dream Theater album… AWAKE. BOOM!! 😉

Do you come from a musical or theatrical family?

L: Only my father… drummer and lyrical singer.

What was your first instrument and how did you acquire it?

M: The first instrument I played was the piano and then the guitar. But at the end I realized that my instrument is my voice… I would say that’s never too late to learn!

A: I tried with drums but it has been a total failure, then I tried the bass and I felt it was the right instrument for me!

L: My first instrument was the guitar…though I tried to play piano, drum and bass.

How did you become a musician? Are you proficient in any other instruments? Have you always been creative?

M: I think I became a true musician when I started playing most of the hours of my days. So from the age of 15. I enjoy playing piano and guitar and, yes, I’ve been always creative.

A: After a friend of mine introduced me to Dream Theater, I started playing bass because I wanted to cover DT songs. I was used to practice 8 hours per day. After some months I was able to play some songs such as Erotomania, The YtseJam, Metropolis and others
and I founded a cover band called Ascra. Then I moved to original music. I released 7 solo albums and composed many other with other bands. So… yes, I would say I’ve been always creative. I’m able to play only bass, no other instruments.

L: Some year ago, I started to playing guitar with many other projects, and I started giving guitar lessons, then I opened my music school. Today I’m a real musician! I’m not proficient in other instruments but with my first love (guitar), I try to be always creative
and original.

A: I founded BAD As in 2016. I would not say that I had a favorite band in mind. In fact, our music is influenced by many bands such as DIO, Megadeth, Anthrax, Disturbed, Pantera but also by progressive bands (which is my main background).

How did Bad As come about? Where did you develop the name? Where is it derived from? What other band names were considered? How would you best describe your sound?

A: Originally the band was called BADASS, but we thought it was to pretentious so we changed it into BAD AS. As what? Up to your imagination! I would say that our sound is powerful but definitely really melodic.

Is there a theme, that runs throughout your new album Midnight Curse or is it a collection of songs? What was the process of putting the songs in order?

M: It’s not a collection of songs, the main theme is based on the concept of “magic”. As for order, well, we decided all together, and it’s based on the music, not on the lyrics.

Name the one album that epitomizes your style of hard rock over all others?

What kind of gear is bringing us the Bad As sound?

A: It all started from the bass because I composed the whole first album “More Pain, More Gain”. My bass definitely had a relevant role in such album. I used a lot of distorted bass as well as particular effects. But that was the beginning, the second album has more powerful guitars and overall the sound is much heavier. I composed half of the album, Mattia the other half, so two different minds and styles that in my opinion fit very well together.

M: A greatest hits collection of Europe (The Band)

A: A Change of Seasons by Dream Theater and then tons of progressive albums (from RUSH to Symphony X)

A: My top 5 albums ever are: Images and Words (Dream Theater), Burn the Sun (Ark), Rust in Peace (Megadeth), Vulgar Display of Power (Pantera), Master of Puppets (Metallica).

M: Oh gosh.. “1987” (Whitesnake), “Endless Forms Most Beautiful” (Nightwish), “Will To Power” (Arch Enemy). Because I think they are beautiful albums, they represent different genres and in this way I would be able to listen to something different every day.

A: A Change of Seasons (Dream Theater), because it has so many great atmospheres; Burn the Sun (Jorn Lande), for the creativity and great voice of Jorn Lance which I love; Rust in Peace (Megadeth), because it’s powerful and aggressive.

What does metal mean to you?

M: It is a lifestyle, divided into other lifestyles.

L: It is the only genre that totally resonates with me!

A: We are currently working on a new album. Unfortunately, our drummer Marino De Bortoli just had a bad car accident and he is still in hospital. So, for now… well, we just hope he will recovery soon.

A: Hard times for music but keep on fighting guys! \m/

M: I think music is like a very sweet goddess, it makes you think, it helps you grow. In short, it always accompanies you, every time, for better or for worse. She can kiss you, but she can also judge you. I hope to convey something with my music, I just don’t want to write songs, I want to get to the soul of people.

L: Go confidential in the direction of your passion!!! the time will give us reason!!