Local rockers DAMAGED THINGS, play what they love so they have no limits. Lead singer and God of BBQ sauce Colin Stambusky opens up a little about his humble beginnings and more.

How did you first get into music, who or what turned you on to heavy metal?

I first found The Beatles “Sergeant Peppers” album in my dad’s record collection when I was 3! I asked my dad to play it for me, it was life changing! Once I discovered KISS it was all over. My other influences were AC/DC and Van Halen . My older brother was listening to UFO, Black Sabbath and Ted Nugent so I was surrounded by a pretty vast collection of heavy metal.

Who was your first rock concert, do you have vivid recollection of it and have your parents always approved?

My first concert was Chuck Berry at the Dixon Mayfair. I don’t really remember too much of it. The one I do Remember was Van Halen, June 12, 1981 in Oakland. My parents were into theater so I think they understood and appreciated big stage spectacles, even if it was a rock concert. They knew that I had a love for music and so were always very supportive.

What was the first music bought with your own money?

Well, for every birthday and Christmas I would ask for a Beatles record. It wasn’t until a friend of mine played me a KISS cassette tape. I immediately went to Yesterday’s used records in Davis and bought every KISS album I could!

How did you become a singer and who are your main vocal influences?

I was a drummer for years, then I had a construction accident and almost lost a finger on my right hand. Unfortunately, I was told I couldn’t play drums while I was healing. After leaving the emergency room I went to hang out at a friend’s band practice. His singer was late so I started singing, just messing around really. The singer walked in and heard me. Thinking he was being replaced, he quit on the spot! We formed a band the next day!
My all time favorite singer is Chris Cornell. Darroh Sudderth of Fair to Midland is one of my top 5 favorite artists. I feel like he’s underrated and doesn’t get enough credit, he’s a monster vocalist! Other vocal influences are Rob Halford, Paul Shortino, Phil Anselmo, Gene Simmons, Udo Dirkschneider, Robin Zander, Rob Zombie, Layne Staley and so many more.

Do you read reviews of music and food and if so how often do they influence what you buy or where you eat?

With music streaming I can listen to anything before I buy it. So if someone says KXM is awesome I can listen to it first, then decide to buy it or not. (BUY KXM they’re awesome!) I do like reading interviews and reviews of concerts and live shows.

When it comes to food I listen to friends more then critics. My friends are going to have more similar tastes to mine so I can often trust their opinions when it comes to trying new foods or restaurants.

How much has the local scene changed since you started playing in bands?

I use to spend all my free time in clubs! I was hanging out with friends, listening to other local bands and passing out flyers to my next show. Now I find that social media, phones and computers have really hurt the circuit. We get our entertainment so easily now, everyone’s always on their phone. They would rather stay home and binge watch Netflix shows than come out to a live show. Or it’s so often that concerts are being streamed live so people end up just staying home and watch for free. We use to worry when only 300 people would come to a show. Today that’s a great number. However, there’s still a number of hardcore music fans that get out there and attend shows whenever they can.

What’s the best show you have played so far with Damaged Things and why?

We actually had 4 shows in a row that were just magic. The first was at On the Y in Sacramento. Jacoby From Papa Roach showed up. He was very nice.
The next was at The Boardwalk in Orangevale. All the bands on the bill were amazing. We then played at Sac town sports bar in old Sacramento. We didn’t know any of the other bands on the bill but they were all really cool! The bands and their fans were super supportive and hung out until the end of our set. Last, we play Woodstock’s pizza in Davis. It’s always special playing our home town. So many supportive friends come out and have a great time! We played with Sky Line Red (they are dumbfounding, check them out.) I’m hoping to add our next show to this list because it’s our first national show with George Lynch/Lynch Mob at the Holy Diver Saturday, July 13th.

What kind of gear is bringing us the Damaged Things sound?

What is the plan for recording new music, where, when and with who will be recording you? Will there be physical product available for purchase and if so in what formats?

Joe Johnson with the Pus Cavern just recorded us. We went in to record 5 drum tracks and we ended up recording all 16 of our songs! We do have plans to release them but for now we are keeping hush hush. When we release the album it will be for sale online and CD.

Zakk Wylde and Dimebag on guitar, Vinny Paul on drums, Glenn Hughes on bass and Chris Cornell on vocals….I’d be the manager!

What have you been listening to lately and reading?

I listen to a lot of Korn, Kxm, Fair To Midland, anything Chris Cornell, Judas Priest, Burning Rain (I cant stop listening to that Record right now.)
I am reading both Peter Criss’s and Rex Brown’s Book right now.

What album epitomizes your style of music over all others?

I think we borrow sounds from everyone, I cant pick one record. If you had everyone in the band pick 10 groups I think they would all be different. All I know is the guys I play with are great! I must be doing something right because they are playing with me. 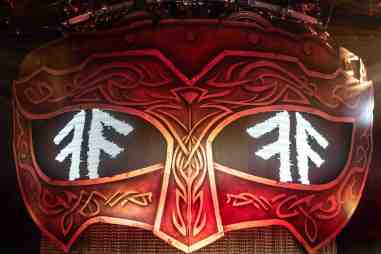