Giving the new Vio-lence EP a listen thru. Curious as the thought process of just releasing EPs instead of a album. Maybe it’s to capture a frenetic moment in time instead of a drawn out process. 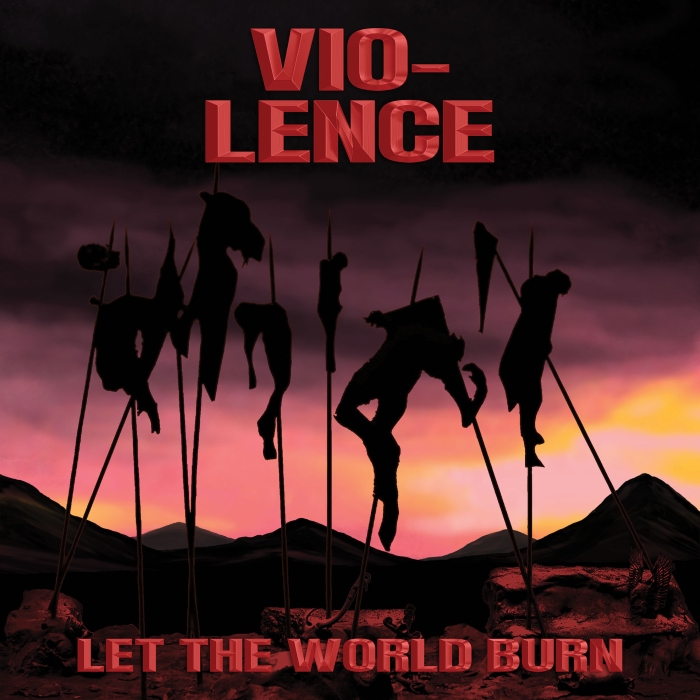 Track 1 – Flesh From Bone – This track was released about a month ago. It hits heavy right out of the gate. I dig the baseline prevalent in the opening seconds. The guitar work is fantastic. Definitely has a Slayer vibe to it with the initial galloping riff. Sean comes in with his distinct tone and unconventional vocal stylings. It amazes me just a few years ago this man has come so far to be able to belt out these songs let alone perform them live.
Track 2 – Screaming Always – Very similar song to Flesh From Bone but has more the old stylings of Vio-lence with their bay area thrash hip hop-esque chanting. I don’t know how else to say it and it may offend, but there’s this almost rap like quality to Sean’s vocals. I dig it. Always have, it’s definitely different and has this flow like quality juxtaposed to the riffs under it. There is no denying Phil and Bobby are a lethal one, two attack with guitar. The solos seem so fresh and effortless. The break down in this will definitely get the bodies flying. I will admit…the acapella portion of this set me back a moment. I think it is fun and unexpected. Something I really didn’t expect but it allows for a lot of stage diving to take place once it kicks back into the music.
Track 3 – Upon Their Cross – Very brutal song. Just toned down and smashing the guitar. I get a Hatebreed vibe from this. Definitely dances on the hardcore side of metal punk. I only give a comparison to get a sense of where the music hits me. I have no clue who is doing what solo on this track but they are both just perfect. The back and forth between Phil and Bobby on this is a highlight within this EP for sure.
Track 4 – Gato Negro – I was confused by the title of this song. I thought, are they doing a thrash song about some wine Les Claypool is releasing? Once this song gets going though it is fast pace, heavy hitting one of the most fun songs on the EP. Sean’s stylings are never more perfect and exhibited in any other song.
Track 5 – Let the World Burn – Closing out the EP is the title track which just released an official video. All in all, I really dig this track, I think the breakdown within this song wasn’t really my favorite part. I’m sure many will love it. I do like the anticipation built up from it though. I could see myself reverse slamming through the pit at the Omni to this and once the song kicks in, just smashing through the heshers, so for that I applaud the evolution. Again these guitar licks definitely top notch.
Admittedly, I had to set a lot of my political leanings and misgivings I have when listening to this. It sucks so much for me to even consider such nonsense when listening to music, but it comes to light when you have such intense times and so much access to each other. Setting aside all of this and just listening to the fresh music, I was impressed. Sean hasn’t skipped a beat, Demmel/Gustafson are on point.
My biggest complaint…5 tracks just isn’t enough so I ordered every variant on vinyl.