Home › Interviews › Olof and Elize of Sweden’s Amaranthe translate popular English phrases into Swedish and enlighten us on their heavy workload.

Olof and Elize of Sweden’s Amaranthe translate popular English phrases into Swedish and enlighten us on their heavy workload. 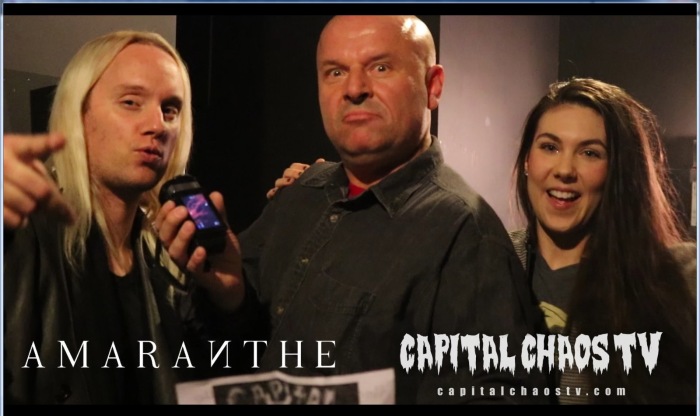 “My first idol before Michael Jackson was Roxette, I grew up with that kind of music and of course Abba, that’s kind of the mothers milk of music if you are growing up in Sweden”. Amaranthe guitarist Olof Mörck

Reviews of Amaranthe’s style are varied, though they all acknowledge that they are mainly a subgenre of metal. According to AllMusic, Amaranthe’s musical style mixes death metal with melodic pop music, giving for a feel of metalcore overall.[Lead singer Elize Ryd acknowledges the difficulties in trying to ascribe their music to one specific genre and describes Amaranthe’s sound as “dance-metal with a taste of death and modern/melodic metal,” though she admits that, unlike death metal, their focus is on “positive energy” and “open[ing] up minds and giving passion, strength and love”. MusicMight classifies the band as melodic death metal and power metal. Sputnikmusic’s overview of the band refers to them as an outfit that is a hybrid of metalcore and power metal, more specifically, combining heavy riffs and breakdowns with Ryd’s “soaring vocals.”